KABC
By Anabel Munoz
DOWNTOWN LOS ANGELES (KABC) -- Most of the 20,000 people who gathered at Staples Center for Monday morning's memorial service had never met Kobe Bryant -- but they felt like they knew him, and his family as well.

They were there to mourn the NBA legend, his daughter Gianna and the seven others who were killed last month in a Calabasas helicopter crash.

Other fans did not have a ticket to the memorial, but they nonetheless traveled from across the country -- and the world -- to pay their respects.

Vanessa Bryant's touching tribute to Kobe, Gigi: 'We love you both and miss you'

Among them was Francesca Flores. She wore a purple quinceañera dress, made in Mexico, that said "Black Mamba" on the front and was adorned with hand-painted images of Bryant in his No. 24 Laker uniform.

"Everybody loves him, and me too, and my whole family too," she said. "Kobe is amazing."

New York resident Michael Bailey watched the service on his phone and gifted his artwork of Bryant to passersby.

"He loved his daughter," Bailey said of Bryant. "A helicopter crash -- that's very sad. One day you're here and just like that you're gone."

Breon Robinson, who lives in Louisiana, said: "My dad's from here, my family's from here. We've been die-hard Lakers fans since the beginning. So it's just - it's natural.

"But when Kobe died I felt like my family died."

Kristijan Beslic of Germany, wearing a No. 8 Laker uniform, used elbow crutches to help him move about at L.A. Live.

"I have an unhealable disease. Actually, I would not be able to walk anymore," he said, but Bryant "gave me the right support to just keep on pushing: take your crutches, go to the airplane, do it like Kobe has ever done it."

A look inside the program for the celebration of life for Kobe and Gianna Bryant⬇️ pic.twitter.com/tfvPhM4tF9 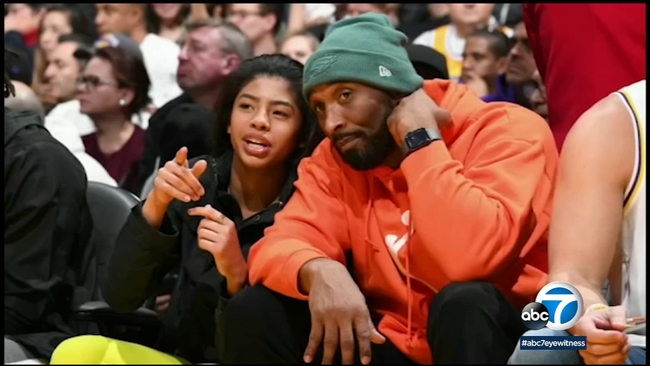