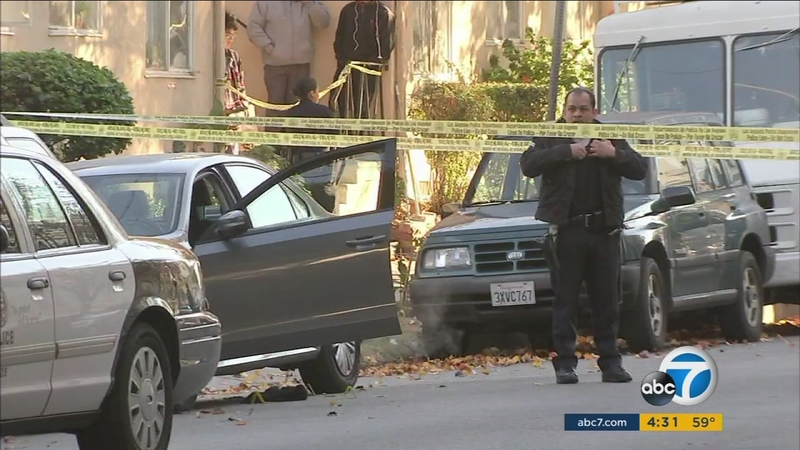 KOREATOWN, LOS ANGELES (KABC) -- A woman was shot to death in Koreatown, and the suspected shooter, her estranged husband, has died from what appeared to be a self-inflicted wound, police said.

Los Angeles police received a report of shots fired at the 3300 block of James M. Wood Boulevard at about 6:30 a.m. on Friday.

Responding officers found a woman, later identified as 39-year-old Gladis Maribel Sicajan of Los Angeles, with a gunshot wound in a car.

Sicajan, a mother of three, was taken to a local hospital where she died.

LAPD said Sicajan had gotten into her car to head to work when her estranged husband, 35-year-old Jorge Martinez, walked up to her vehicle and opened fire.

A neighbor said she heard screams, then two shots. Witnesses called LAPD and gave them a description of Martinez who was running from the scene.

That's where officers found a man fitting Martinez's description. Police said Martinez shot himself in an apparent attempt to take his own life.

He was found on the sidewalk in front of a parking structure and rushed to the hospital where he died hours later. Investigators said the couple has a record of prior domestic violence issues.

"Once we ran the name and put two and two together, we determined that these two individuals were previously involved in a relationship and had a history of domestic violence," LAPD Capt. Vito Palazzolo said.

Investigators learned Sicajan had been living in fear of Martinez, who was in court on Thursday for a status hearing after completing 37 out of 52 counseling sessions for domestic violence.