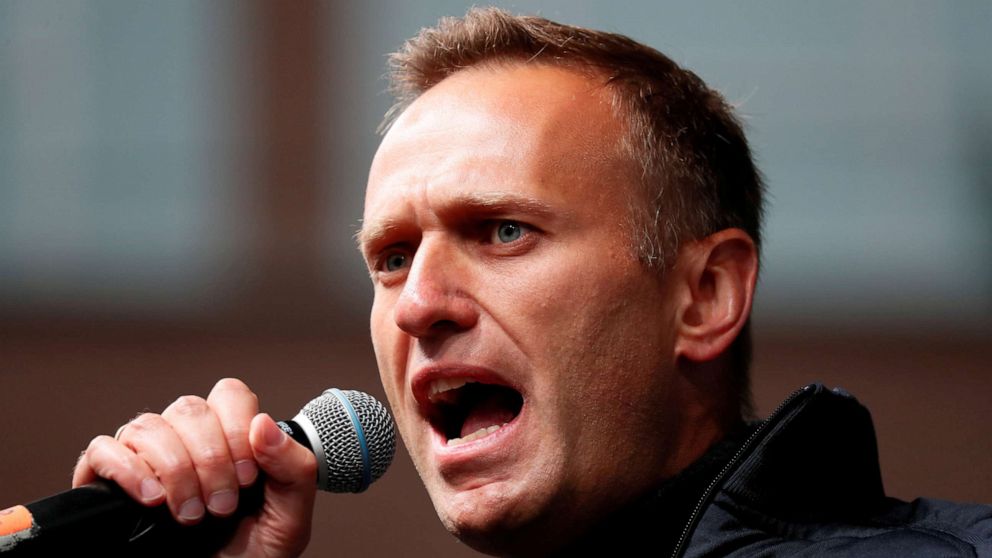 LONDON -- Russian opposition leader Alexey Navalny used his first interview since recovering from a suspected poisoning by a Novichok nerve agent to say he believes Vladimir Putin is responsible for the attack that left him fighting for his life.

Speaking to German newspaper Der Spiegel in an interview published on Thursday, Navalny said: "I believe that Putin is behind the crime, and I see no other version of the crime. I am not saying this to flatter myself, but on the basis of fact. The most important fact is Novichok. The order to use or produce it can only come from two men - the head of the [Federal Security Service] FSB or of the foreign intelligence service SWR." Those men "cannot make such a decision without Putin's instruction," he said.

Kremlin spokesperson Dmitry Peskov was quick to deny the "insulting" accusations, describing them as "baseless and unacceptable." He also claimed that specialists from the CIA were now working with Navalny, an anti-corruption campaigner and one of Putin's fiercest critics inside of Russia.

Navalny fell ill on a flight in Siberia on August 20 and, after initially being treated in Russia, was flown to Berlin a few days later where German doctors confirmed he had been poisoned by a Novichok nerve agent. The Russian government and doctors treating him at first denied there was any evidence of poisoning. Navalny spent weeks in an induced coma before recovering.

"I think they were determined not to let me leave the country, and that's why they publicly declared that I was not fit for transport," Navalny said when asked why he was allowed to leave Russia for treatment if Putin was behind the attack. "They were waiting for me to die. But thanks to the support for me and thanks to the efforts of my wife, the whole thing threatened to turn into a kind of reality show called 'Nawalny dies in Omsk.'"

Navalny thanked German Chancellor Angela Merkel, as well as the staff at the University Hospital of Berlin for saving his life, and says he is now able to exercise and carry out limited work on the computer.

"Not returning [to Russia] would mean that Putin had achieved his goal," he said."And my task now is to remain the guy who is not afraid. And I am not afraid! If my hands tremble, it is not from fear, but from this stuff. I will not give Putin the gift of not returning to Russia."

Novichok is the name of a series of nerve agents developed by scientists in the Soviet Union, and development of the Novichok program continued after the USSR collapsed. In the interview, Navalny described the use of the nerve agent as like "dropping a nuclear bomb on a person."

The poisoning of Navalny bears many similarities to an attack on former Russian double agent Sergei Skripal and his daughter in the U.K. in 2018, when they were poisoned in the town of Salisbury. Officially, however, the Russian government have repeatedly denied the existence of the Novichok series of nerve agents.

Several countries in the EU are now reportedly weighing up new sanctions on Russia in the aftermath of the attack. But as he faces a long road to recover himself, Navalny admits that "nobody really knows" what the long term effects of the poisoning on his health will be.

"I'm something of a guinea pig. There aren't that many people you can watch living after being poisoned with a nerve agent ... the Russian leadership has developed such a penchant for poisoning that it will not stop so soon."
Report a correction or typo
Related topics:
abc newsnational
Copyright © 2020 ABC News Internet Ventures.
More Videos
From CNN Newsource affiliates
TOP STORIES