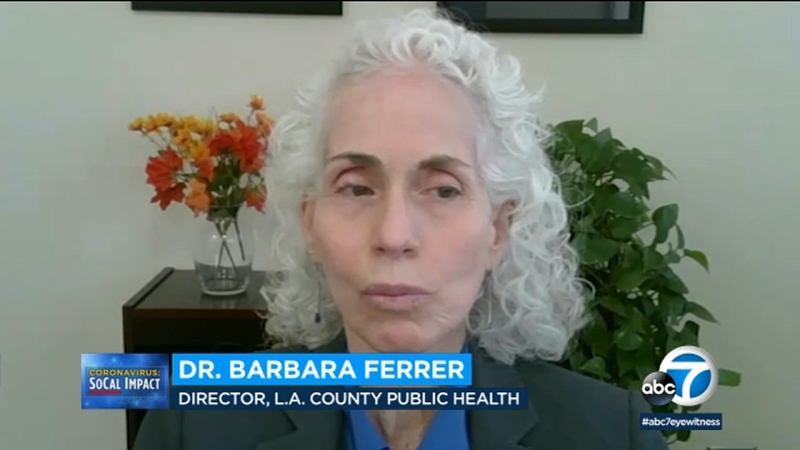 "The data does present a clear picture that gatherings, even small ones, are risky and can easily result in a great deal of transmission of the virus," said Dr. Barbara Ferrer, director of Los Angeles County Public Health.

The county's latest figures released Monday indicated 1,406 new cases were reported. Ferrer noted that Monday numbers are usually smaller because of a lag in weekend reporting data - meaning figures throughout the week are expected to be higher.

Since the start of the pandemic, there have been 7,076 deaths from COVID-19 in Los Angeles County, Ferrer said.

While the positivity rate is holding steady, daily new cases continue rising. Ferrer says gathering at a loved one's home may create a false sense of safety and lead to infections

"We're pretty convinced at this point that these smaller gatherings, where people feel pretty safe because they're with friends and extended family, are in fact fueling a lot of the increase because they're just not as safe as we would like to believe they are."

Ferrer's warning comes weeks after the state revised its guidelines for gatherings in an effort to allow some level of social interaction while still maintaining safe practices. The guidelines now allow people from three different households to come together for two hours or less, as long as they wear masks, practice social distancing and stay outdoors.

Ferrer's warning came on the same day as the superintendent of the Los Angeles Unified School District spoke out about issues the district is facing, including students underperforming in distance learning settings and a lack of help from the city and county governments.

Superintendent Austin Beutner said there has been a decrease in grades in the first 10 weeks of the semester.

"The portion of students in both middle school and high school, receiving D's and F's have grown compared to last year," Beutner said. "The attendance figures and interim assessments don't reflect the desire or capability of students."

LAUSD says it is expanding its efforts to resume some in-person instructions in very small groups, as well as in-person assessments for children with special needs.

The district will also allow sports team to begin conditioning with physical distancing.

Beutner is calling on city and county government to provide needed relief to the district.

County officials responded by noting they have already provided extensive help to the district, including a $135 million food distribution program as well as working with federal and state agencies to obtain help reimbursing LAUSD for some expenses incurred during the pandemic.