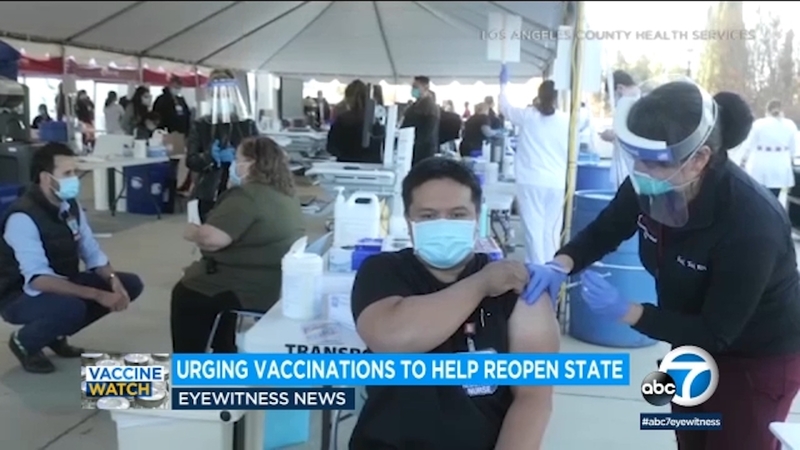 LOS ANGELES (KABC) -- The five major counties in the greater Los Angeles area are now all in the state's less-restrictive orange tier, allowing some businesses to reopen and others to expand their capacity.

That means restaurants, houses of worship, and theaters are among the venues that can increase their capacity to 50% indoors.

To fully reopen quicker, health officials are urging everyone who is eligible to get vaccinated.

County health officials say it's especially urgent to get vaccinated now before the more-contagious variants of the virus become more prevalent in the county.

On Wednesday, county health officials said for the first they had detected variants that originate in Brazil and South Africa. So far only one case of the South African variant and three of the Brazilian have been found. But they are concerning because both are more easily transmissible and may be more resistant to treatment.

They noted the county lab only tests a small number of samples for variants, so it is likely there are more present in the county's population.

"The timing of the vaccination clinics here today and what will be another in a week or two couldn't come at a better time," said Dr. Paul Simon, county health's chief science officer.

"We are in a critical race to get as many people as possible vaccinated, before the coronavirus variants gain a deeper foothold in our communities."

Pop-up vaccination sites are opening in places like downtown Los Angeles and Chinatown to help bring easier access to shots to vulnerable populations as well as frontline workers like restaurant staff.

Officials say they now have vaccinated about 3 million people, at least with first doses, throughout Los Angeles County.

They say they need to at least double that number over the next several months.
Los Angeles Mayor Eric Garcetti says they are getting enough vaccines and there is enough capacity.

Very quickly however they might not have enough people making appointments for all the vaccines that will be available. That's why they are urging people to get vaccinated.

"We want you to know you need to get your vaccine and we will help you get it done," Garcetti said. "We're making it easier to get this free shot that will protect you, will protect your families."
Report a correction or typo
Related topics:
health & fitnesslos angeles countylos angelescovid 19 vaccinecoronavirus los angelescovid 19
Copyright © 2022 KABC Television, LLC. All rights reserved.
TOP STORIES
Man accused of fatally stabbing UCLA grad student arrested
Voting bill collapses, Democrats unable to change filibuster
LA County sees 94% jump in homicides in 2 years, LASD stats show
TX mom pregnant with 6th child dies from COVID complications
Increase in SoCalGas bills a shock to some local customers
Homeowners 'wasting water' will get more than a fine, officials say
Vice President Kamala Harris to visit San Bernardino on Friday
Show More
COVID-19: 59 new deaths in LA County, positivity rate at schools drops
Man charged in attack on OC vaccine-clinic workers
Starbucks no longer requiring US workers to be vaccinated
Cardi B offers to pay for funerals of all 17 Bronx fire victims
Man sentenced to life in prison for violent crime spree in LA County
More TOP STORIES News