Although those key indicators are "trending in the right direction," officials say there's still a long way to go in controlling transmission and subsequent hospitalizations.
KABC
By Rob Hayes and ABC7.com staff 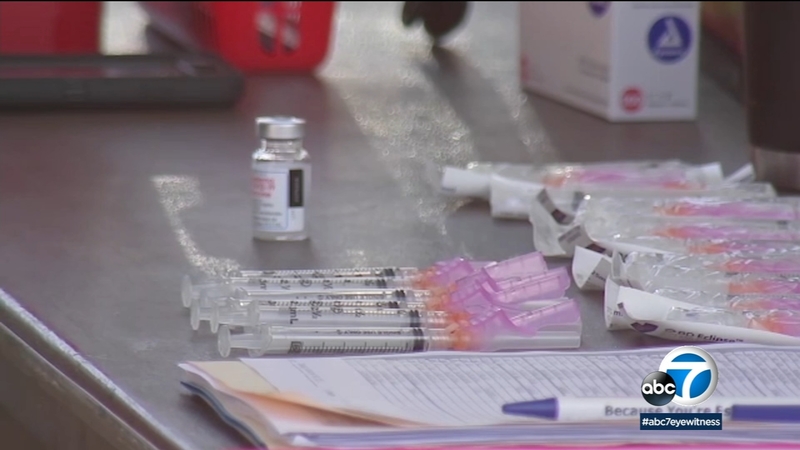 COVID-19 cases, hospitalizations are leveling off in LA County

On Friday, the county Department of Public Health said new cases were considerably lower this week, citing a 30% decrease in the seven-day average of daily cases from last week. The county's test positivity rate, which stood at 20.8% on Jan. 1, has also dropped to 12.7%.

The test positivity rate was 3.8% on Nov. 1, just before the surge began, officials say.

Coronavirus hospitalizations are also down by 8%. There are currently 7,073 individuals hospitalized with COVID-19, 24% of which are in the ICU.

Although those key indicators are "trending in the right direction," officials say there's still a long way to go in controlling transmission and subsequent hospitalizations.

"While we have come a long way this week with community transmission, we have a long road to go and must continue to practice infectious control measures: wear a face covering and maintain physical distance when out of your home," officials said in a press release.

Widespread vaccinations are key to tamping down coronavirus deaths. L.A. County has six mass vaccination sites up and running, but supply of the shots is far from meeting the demand.

Health officials say without 500,000 doses per week, the county won't be close to vaccinating enough people this year.

At the current pace, vaccinations for the entire population of Los Angeles County won't be completed until June 2022, according to Mayor Eric Garcetti.

"If the flow of doses into the county remains at the current level of approximately 150,000 per week, the vaccination effort will likely extend well into 2022," said the county's Chief Science Officer Dr. Paul Simon.

Health officials say they're already expecting a dip in available vaccines for next week, and now people who need to get their second COVID shots are starting to head back into the system.

"The latest allotment which we were allocated for next week , was less than 150,000 doses and most of this allotment will be needed for second doses for those who received their first dose two to three weeks ago," Simon added.

Overall, California officials say they are working to speed up vaccine distribution.

Data as of Friday from the Centers for Disease Control and Prevention shows a jump in the number of Californians who've received at least the first dose of the vaccine.

It now stands at just under 5%, up from 3% last week. But compared to distribution efforts in other states, Washington D.C. and Puerto Rico, California ranks 46th in the country.

As for L.A. County's vaccine super sites, which were touted as having the capacity to handle 4,000 people a day, and Dodger Stadium which was said to be able to handle as many as 12,000 daily, officials say it won't be close to those numbers next week.