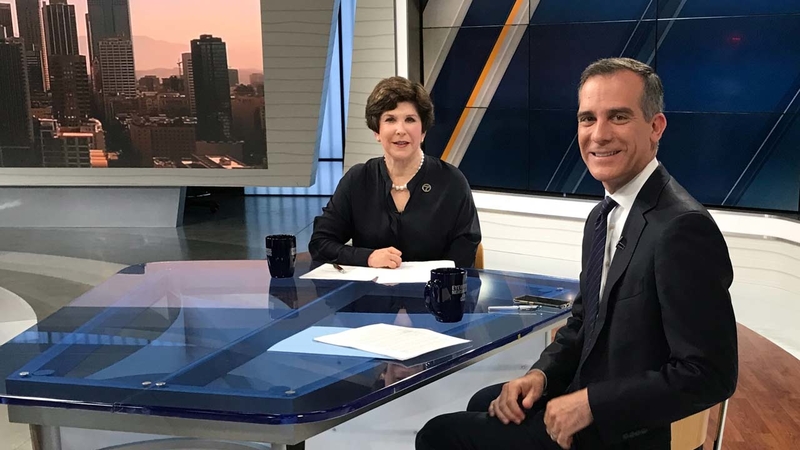 On Eyewitness Newsmakers, he said he asked the utility - what is Los Angeles looking at for the next 50 years? Also, if this is the new normal, the mayor said there may be a need for equipment that is made for a hotter climate like in Palm Springs.

Underground equipment literally melted in the heat, taking 48 hours to replace, a hardship made worse on customers by lack of information when it would be fixed.

AIR7 HD captured dozens of illegal fireworks lighting up the skies over the city of Los Angeles.

Viewers complained that they saw no enforcement on the city's fireworks ban over the Fourth of July holiday. The mayor said the city looked like a "war zone" when he flew in on the holiday two years ago. Garcetti said he'd like to talk to Los Angeles City Attorney Mike Feuer about prosecutions for lawbreakers in the form of fines. The mayor described the severe injury to children caused by something as seemingly harmless as a sparkler.

Garcetti commented on the latest proposal to build a tram to the Hollywood Sign. Warner Brothers is proposing a $100 million project that would build a six-minute ride from Forest Lawn Drive to a visitor center near the sign. It could take congestion out of Hollywood Hills neighborhoods, and the mayor was "very supportive" of the idea to take traffic off those neighborhood streets, while still preserving Griffith Park. He said the "impact on nature is minimal."

Warner Bros. is proposing a new idea for people to see the Hollywood sign and said it's ready to put its money behind an idea that's been around for years -- an aerial tram.

Viewers continue to ask the mayor when the homeless will be off the streets. Garcetti said the city is not yet going to strictly enforce the ban on sidewalk sleeping. The mayor said the short term solution is pop-up temporary housing planned for every City Council district. He also said the state is giving cities $150 million for emergency housing.