Once again, West Hollywood is at the center of the celebration. This year, the fest is returning to its roots as a celebration of the LGBTQ community after last year's fest took on the tone of a political protest.

This year's theme is #JustBe, encouraging people to embrace, embody and express what pride truly means to them.

"We've grown up at pride over the past 10 years, and it's family when we walk on these streets," said Encino resident Noah Reich.

Crews were getting the festival grounds on San Vicente Boulevard ready for kick-off, which is set for Saturday at noon.

There are three stages along San Vicente, but the weekend culminates with the Pride Parade Sunday from 11a.m. to 2 p.m. About 170,000 people are expected to attend, and more than 125 groups and floats are taking part.

"I mean, it's kind of like the epicenter of the gay rights movement -- things that happen in L.A. and San Francisco," said Chicago native Sean Romero.

Helping kick off the weekend festivities was the annual Dyke March Friday night.

"Dykes -- it's a very strong word, so a lot of lesbian, queer and female-identifying people also want their own option to politically organize," said Shannon Shue of Leimert Park.

As for authorities, they said they want all the attendees to have fun but follow rules.

"There's a number of prohibited items. Obviously alcohol from the outside, food items, coolers, things such as selfie sticks, sticks that may be attached to signs, pets, unless they're service animals..." said Capt. Sergio Aloma.

Parts of Santa Monica Boulevard are expected to be closed from 5 a.m. until 5 p.m. on Sunday for the parade.

For more information on the L.A. Pride Parade, visit LApride.org/event/2018-la-pride-parade. 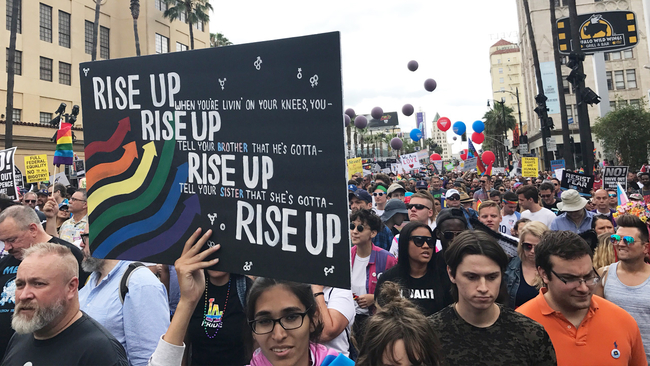