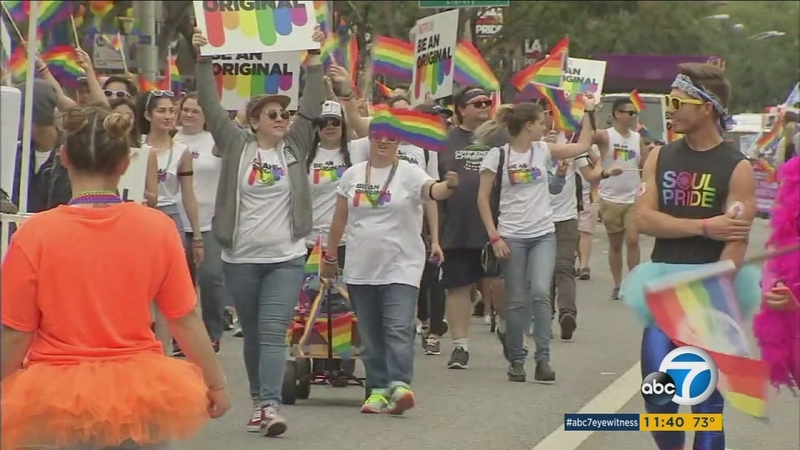 WEST HOLLYWOOD, Calif. (KABC) -- The 47th annual, three-day Los Angeles Pride Parade and Festival kicked off Friday night in West Hollywood, and this year, Sunday's parade will be replaced by what is being called the Resist March.

The Pride festivities started at West Hollywood Park, featuring food, rides and live music, but the biggest event of the weekend is the Resist March, a replacement for the annual Pride Parade.

"The LGBT community is lending our gigantic iconic rainbow flag to anyone who feels under threat," said march founder Brian Pendleton.

Organizers say it was inspired by the women's marches that took place after President Donald Trump's inauguration.

Pendleton said there's going to be one key difference this year: People of all backgrounds, not just the LGBTQ community, will get to participate in the parade.

"Immigrants of any status: Dreamers, women who care about reproductive health, people who don't want to lose the Affordable Care Act, people who want their Muslim friends and family to be able to come into the country," he said.

Participants will start to gather at Hollywood and Highland for the Resist March at 8 a.m. on Sunday. Opening remarks begin at 9 a.m., and then they will make their way to West Hollywood. At approximately noon, a rally will be held.

The festival kicked off Friday with the "Dyke March" along Santa Monica Boulevard, with rolling street closures that ended at 10 p.m.

With tens of thousands of people expected for the three-day event, the top priority for law enforcement is safety.