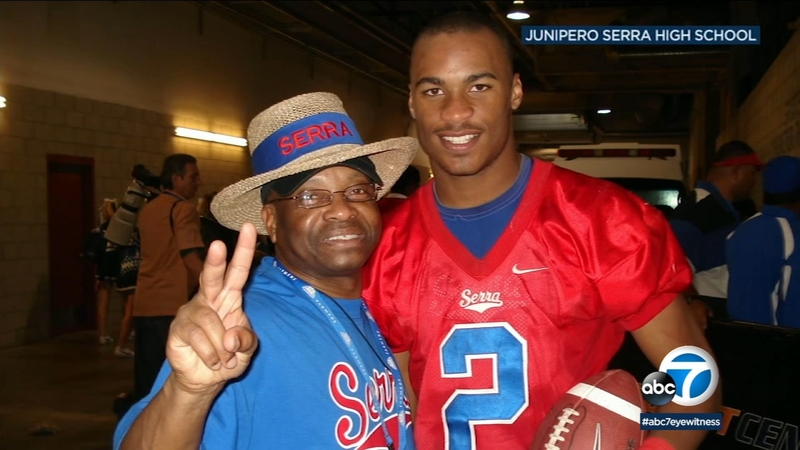 GARDENA, Calif. (KABC) -- Junipero Serra High School has long been a football powerhouse, putting more than 20 of its players into the NFL.

But the one getting the most attention these days is the wide receiver - Robert Woods - who helped bring the Los Angeles Rams to the edge of an NFL championship.

"He texted me like 'Coach I'm going to the Super Bowl! I'm so fired up!'" said Scott Altenberg, the head coach of the Serra High football team and the man who coached Woods for four years there, winning the 2009 state championship.

"I'm a pretty good coach when a Robert Woods is on your team," Altenberg said with a hearty laugh. "I'm a genius! I haven't been this much of a genius since he left!"

But the staff at Serra also likes to point out Woods' academic achievements as well, calling him the ideal student-athlete.

"He took honors classes with me. He took AP Physics. He took economic college courses," said Serra's vice principal and Woods' math teacher. "He was self-disciplined."

Altenberg also had Woods in an honors English course and echoed those feelings.

"He was always the same way he was on the field he was in the classroom," Altenberg said. "He would get after it. He was a competitive guy and if someone got a 94, he wanted to get a 96."

It's that drive that has carried Woods to NFL stardom and a possible Super Bowl ring.

Most of the community at the Gardena school is obviously rooting for the hometown Rams and their hometown hero, but many may not realize that another Junipero Serra High School graduate will be playing for the New England Patriots in the Super Bowl.

Future Hall of Fame quarterback Tom Brady graduated from Serra High School - but not the one in Gardena. His Serra is in San Mateo, Calif.