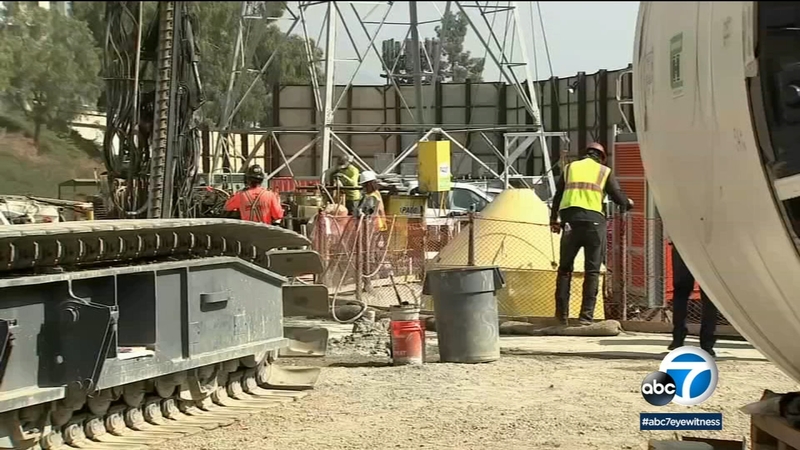 BURBANK, Calif. (KABC) -- If you've been on Riverside Drive in Burbank lately, you've probably seen this giant sound wall that's taken over Johnny Carson Park South. LADWP took Eyewitness News on the other side of the wall where crews are hard at work replacing a valuable water pipeline that supplies tap water from the Northeast San Fernando Valley to Central L.A.

"We're making sure that the water within the pipe, it actually has positive pressure. Meaning that in the event that the pipe ever had a rupture, water that's in the ground would not enter the pipe causing some sort of cross contamination," said Johan Torroledo, the project manager for LADWP.

The new steel pipe which hasn't been installed yet is replacing a pipe that was built in the 1940s. Most of the work takes place underground, and the entry point is a 63-foot deep hole in the ground. Next month, a 346-foot tunnel boring machine will be lowered down in parts to dig the pipeline. The project will be completed by March of 2022.

Since the 1500s, mining equipment has been named after a female for good luck and good fortune. The tunnel boring machine in this project is named Luciana after the project manager's 4-year-old daughter.

Johnny Carson Park South will be completely rebuilt once the project is complete and remain a Burbank park.