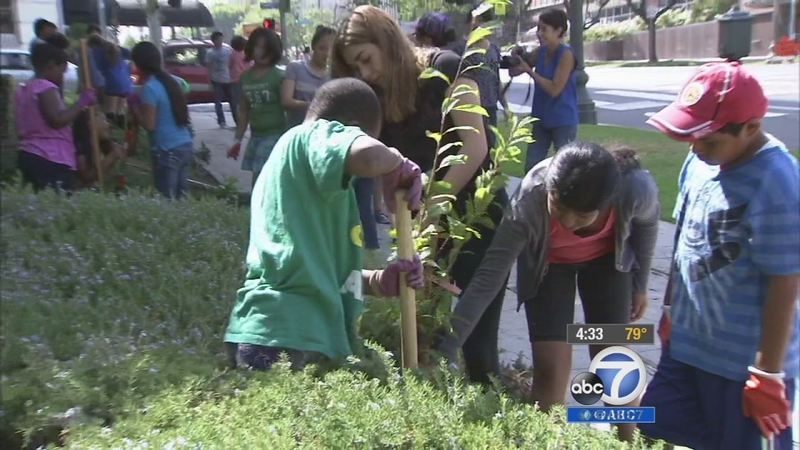 WESTLAKE DISTRICT, LOS ANGELES (KABC) -- Dozens of fruit trees planted in the Westlake District by children have been uprooted. They were planted around Lafayette Park in hopes the trees would offer the community shade and free snacks. But dozens were ripped out and snapped. Some of the youngsters are using the vandalism as a learning experience.

It's a job they've already done before. Children are trying to plant more than 150 fruit trees along eight city blocks in the MacArthur Park area.

But Tuesday morning the first 30 or so trees they planted were found uprooted and snapped in half.

"You actually did us a favor. We can actually grow from this experience," said 12-year-old Nana Ampofo, one of the kids involved.

Ampofo said she was devastated at first, but she's now focusing once again on changing the community.

When it's finished, these trees will create an "urban fruit trail," and people passing by along Wilshire Boulevard can pick the organic fruit for free, including lemons, limes, oranges and peaches.

"It's very important, the plants, because right there you could get more energy from the fruits and from the plants," said 9-year-old Lizeth Cezilio.

The summer program is organized by Heart of Los Angeles in partnership with Fallen Fruit, which has worked on similar projects around the world.

David Burns says the trees, which were purchased with grant money, were simply damaged, but are not dead.

A police report has been filed. At this point the kids say they have no idea who's responsible.

"Respect the city and respect your neighbors," said Burns.