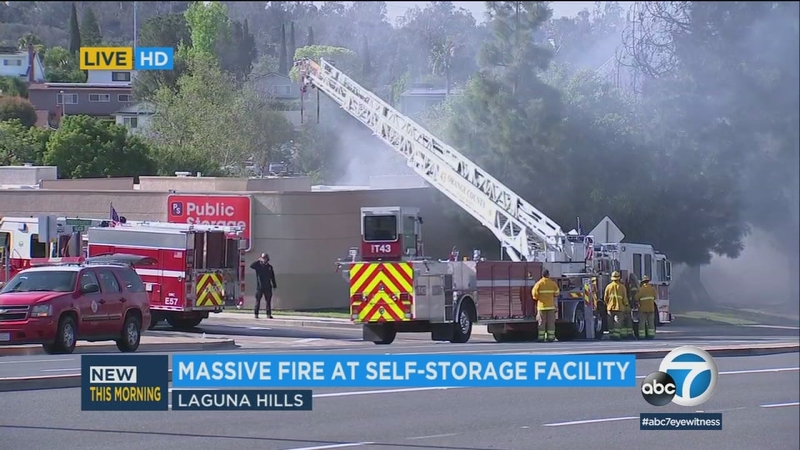 LAGUNA HILLS, Calif. (KABC) -- More than 150 storage units were damaged in a massive fire that ripped through a public storage facility in Laguna Hills Sunday morning, which prompted a large response from 100 firefighters.

The blaze was reported by a passerby shortly after 3 a.m. at the two-story self-storage facility in the 25000 block of Costeau Street, according to the Orange County Fire Authority.

The four-alarm fire shot through the roof of the building and caused a partial wall collapse, prompting firefighters to pull back from the firefight and turn to defensive mode. Steel roll-up doors and forcible entry issues also caused the blaze to quickly progress along the second floor.

The smoke could be seen for miles as the fire was active for nearly four hours before crews were able to knock it down later Sunday morning.

At least 150 storage units were damaged or destroyed in the blaze, officials said.

One major challenge for crews was not really knowing the material that was burning. Because it's a storage facility, there can be any number of potentially hazardous items.

"There's nobody that enforces what is stored in there -- cars to furniture, we just don't know," said OCFA Capt. Tony Bommarito.