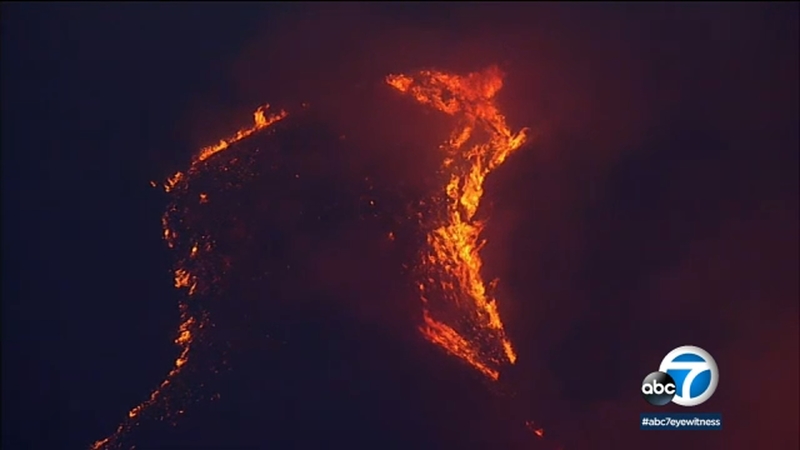 LAKE HUGHES, Calif. (KABC) -- More than 1,500 firefighters in the Angeles National Forest on Sunday continued their efforts against the massive Lake Fire, which officials say has burned 17,862 acres after it was downgraded in size earlier in the day.

The size of the fire zone was initially reduced from 17,482 acres to 14,714 due to "improved infrared mapping of the fire perimeter," according to the Los Angeles County Fire Department. Several hours later, however, fire officials updated that number after over 100 lightning strikes caused spotting and fueled the flames.

The blaze was only 12% contained as it burned near Lake Hughes amid an extreme heat wave.

Fire officials said 21 buildings had been destroyed, including at least five homes, and more than 5,400 residences were threatened.

An evacuation site was established at Highland High School, at 39055 25th St. W in Palmdale, according to the American Red Cross.
As if firefighters at the scene did not have enough to contend with, several of them had to run to safety when a longhorn bull that was apparently escaping the blaze charged at them on Friday.

Evacuation points were set up at two locations in Lake Hughes as the Lake Fire threatened thousands of structures and prompted evacuations for at least 100 structures.

"Crews were clearing the road so the engines could get to a clearing when they were chased out" by a bull named Ferdinand, the Ventura County Fire Department said in the caption of a video that showed the encounter. No one was injured in that incident or the the fire itself.

Firefighters were struggling in steep, rugged terrain amid scorching temperatures. The National Weather Service warned temperatures could hit 111 degrees in the Antelope Valley Saturday, and winds gusting 15-20 mph was expected later in the afternoon.

The cause of the Lake Fire remains under investigation.

Download the ABC7 Los Angeles app on your iPhone or Android device to get the latest updates on the Lake Fire.