The Los Angeles Lakers are NBA champions for the 17th time in their history.
KABC 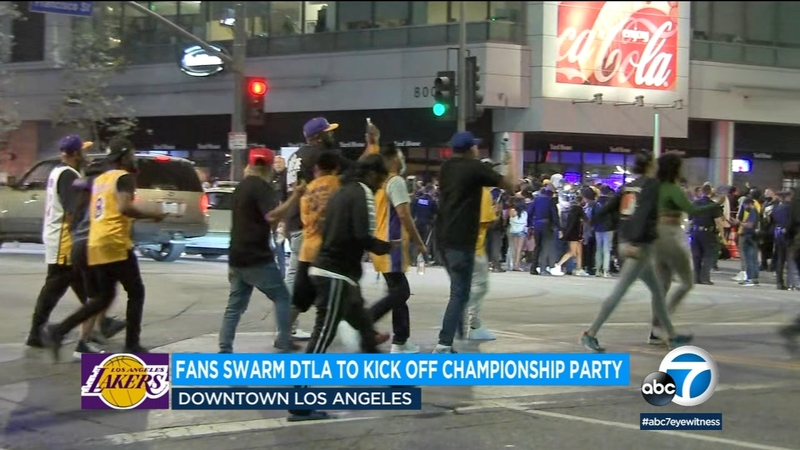 LOS ANGELES (KABC) -- The Los Angeles Lakers are NBA champions for the 17th time in their history.

LeBron James and Anthony Davis led the way for the Lakers in their 106-93 win over the Miami Heat in Game 6 of the NBA Finals Sunday.

James had a triple-double, ending the night with 28 points, 14 rebounds and 10 assists on his way to being named Finals MVP. The win is James' fourth championship after winning two with the Miami Heat and one with the Cleveland Cavaliers.

In his first year with the Lakers, Davis proved to be a difference maker and played big when the Lakers needed him the most during the finals. Davis scored 19 and added 15 boards in Sunday's win.

The win caps off one of the most challenging seasons in Lakers franchise history. For L.A., the 2019-2020 season marked a return to the playoffs for the first time since 2013. They entered the season as one of the front runners to win after Davis was paired up with James.

The season took on new meaning after the tragic death of Lakers legend Kobe Bryant, his daughter Gianna and seven others in a helicopter crash in Calabasas.

The Lakers said they were playing the rest of the season in his memory.

They delivered what Bryant did five times for L.A. - a ring.

With that, the league's bubble chapter, put together after a 4 1/2-month suspension of play that started March 11 because of the coronavirus pandemic and came with a promise that it would raise awareness to the problems of racial injustice and police brutality, is over. So, too, is a season that saw the league and China get into political sparring, the death on Jan. 1 of commissioner emeritus David Stern - the man who did so much to make the league what it is - and then the shock on Jan. 26 that came with the news that Bryant, his daughter Gianna and sevens other died in a helicopter crash.

Lakers general manager Rob Pelinka put together a roster comprised of veteran players such as Rajon Rondo, Dwight Howard and Danny Green. Each found their role on the team, along with younger players like Kyle Kuzma and Alex Caruso. They finished the season as the No. 1 seed in the Western Conference, a year after finishing in the lottery.

"You have written your own inspiring chapter in the great Laker history," Lakers owner Jeanie Buss said. "And to Laker Nation, we have been through a heartbreaking tragedy with the loss of our beloved Kobe Bryant. Let this trophy serve as a reminder of when we come together, believe in each other, incredible things can happen."

It is the first title for the Lakers since 2010, when Kobe Bryant with the help of Pau Gasol led the Lakers to a Game 7 win over the Boston Celtics.

With 17 NBA championships, the Lakers are now tied with the Celtics for most titles all time.