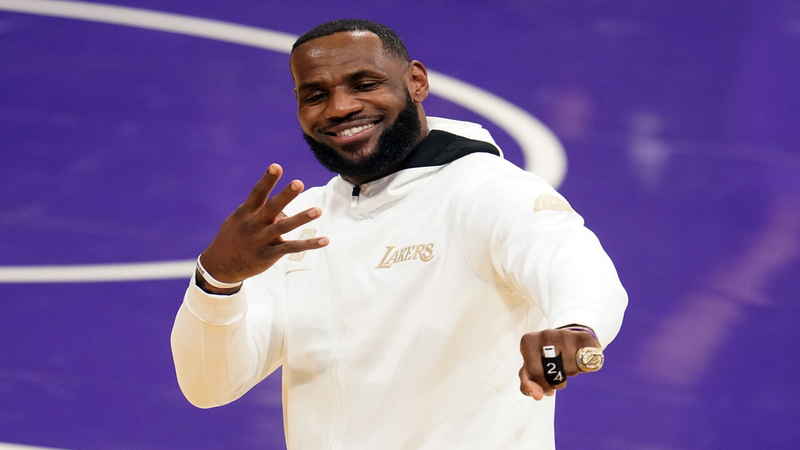 The team doesn't plan to hold the traditional ceremony of raising a championship banner to the roof of Staples until fans can return to the arena.

The 2019-20 NBA season was very different due to the pandemic, and so was Tuesday's ring ceremony. California's coronavirus restrictions kept fans out of the building.

The Lakers will leave their 17th championship banner covered with a black cloak, with the message, "Stay tuned, Lakers family," printed in gold block letters.

Before the ceremony, Lakers star LeBron James expressed the bittersweet moment of receiving his fourth championship ring without fans and family in attendance.

WOW!!!! Ring 💍 Night man!! It just hit me. Man o Man!!! Hate my family, friends and fans won’t be there to witness it 😞 though! Nevertheless I can’t believe I’m RINGING it up again! #TrulyBlessed🙏🏾 #ThekidfromAKRON🤴🏾

While each player and coach received their rings, it was presented, virtually, by their family and loved ones.

The Lakers 17th championship ring symbolizes the tough season they went through. The jeweler Jason of Beverly Hills incorporated different elements, playfully referred to as "Easter eggs," to represent all the moments that stood out in what was the longest season - counting by the calendar - in league history.

To recognize the 95 days the Lakers spent in the Orlando bubble to win their 17th championship, there are .95 carats in each of the 17 purple amethyst stones comprising the "L" on the ring's face.

There are .52 carats of yellow diamonds in every ring, representing the 52 regular-season wins L.A. stacked up. The word "unity" is etched into every ring, a call to the social justice movement that the entire NBA, not just the Lakers, took on as a cause. The phrase "Leave A Legacy" -- the Lakers' playoff slogan -- is also emblazoned in gold in LeBron James' handwriting on every ring.

And Kobe Bryant, who died in a helicopter crash along with his daughter, Gianna, and seven others in January, has several tributes on the ring. There is a Black Mamba snake encircling every player's uniform number, and the ring has a first-of-its-kind detachable top, revealing another Bryant salute.

Spoiling the ceremony just a bit, the Clippers won the season opener, 116-109.