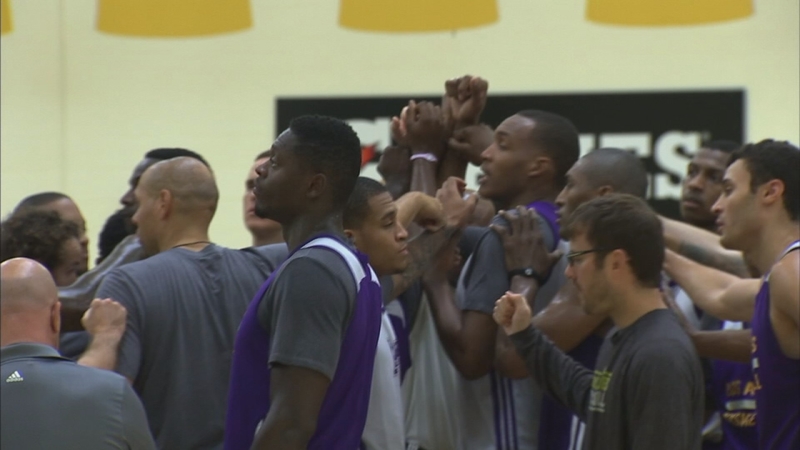 LOS ANGELES (KABC) -- Former NBA star Lamar Odom is making small improvements while in a coma in Las Vegas after being found unconscious at a legal brothel in Nevada, which is weighing heavily on the minds of players.

He grew up in Queens with Odom and said he had a difficult time focusing after hearing of his childhood friend's slow improvement.

"I've known Lamar since I was 11 years old and, you know, I see Mitch every day, but I want to thank Mitch and the Lakers Organization for being very concerned and Gary Vitti for keeping us updated," said Metta.

Odom was rushed to the hospital Tuesday after employees at the Love Ranch brothel found him in his VIP suite and called 911. They said Odom had been taking herbal Viagra and had drunk part of a bottle of cognac.

Doctors say several of Odom's organs, including his kidneys, have shutdown, and authorities say the longer he stays in a coma, the less likely he will survive.

"Throughout the day, we are all thinking about him," said Byron Scott, head coach for the Lakers. "We are all just praying, just praying for him."

Meanwhile, fans all over the world have shown overwhelming support on social media.

Laker Kobe Bryant and Odom won two NBA Championships together and are reported to be very close.

Sources say when the news broke of Odom Tuesday night, Kobe left that preseason game in Las Vegas early so he could get to the hospital and be at his friend's bedside.

Scott says Bryant is hurting too much to share his feelings publicly.