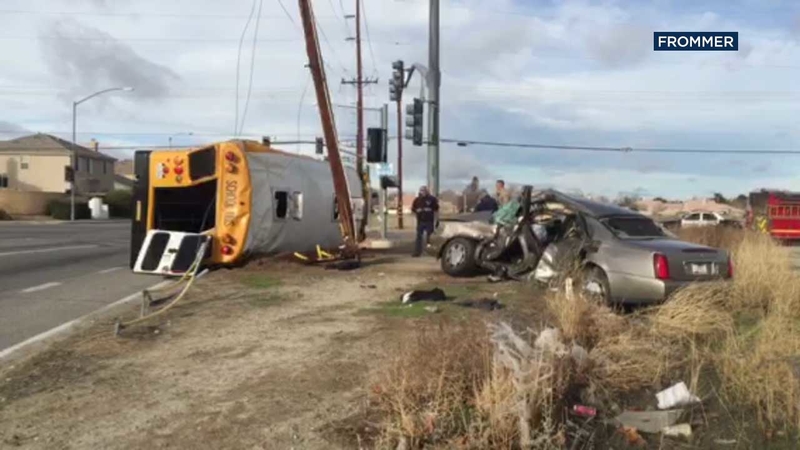 LANCASTER, Calif. (KABC) -- Eight special education students were injured - one critically - after a school bus and a vehicle crashed in Lancaster, fire officials said on Tuesday.

There were eight special education students and two teacher's aides on the bus -- one student suffered critical injuries, seven other students suffered minor injuries and the aides were not injured, according to the Los Angeles County Fire Department.

A map shows the location of a crash involving a school bus and a car in Lancaster on Tuesday, Feb., 7, 2017.

The school bus driver was unharmed.

California Highway Patrol officials said the bus apparently T-boned the car. A utility pole was also knocked over as a result of the wreck.

Five ambulances were requested. The two critically injured individuals were transported to the hospital. The seven students with minor injuries were also transported to be evaluated.

"We are saddened by this terrible accident and are providing counseling services to those who need support during this very difficult time. Our thoughts and prayers are with our students, staff and their families."

Officials said the bus was equipped with seat belts and that it appeared the students were wearing them.

The bus driver stated that the driver of the Cadillac ran through a red light and caused the crash, but authorities had not confirmed that account to the media.