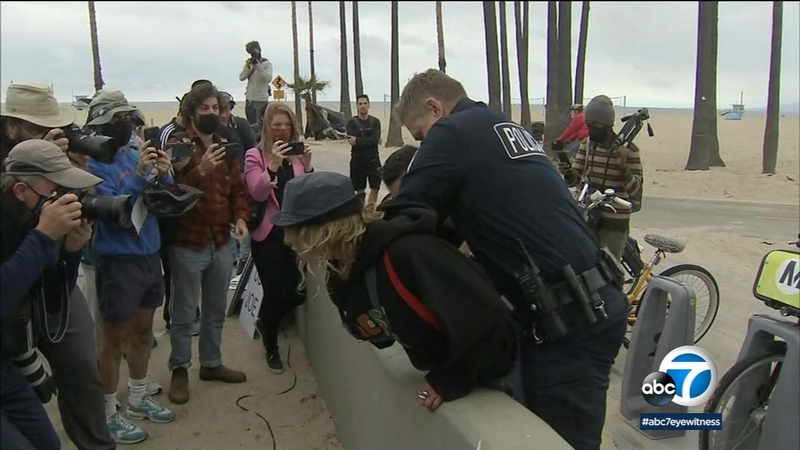 VENICE, LOS ANGELES (KABC) -- A woman with a knife was arrested Monday morning in Venice at a news conference where mayoral candidate and Los Angeles City Councilman Joe Buscaino was speaking about the city's homelessness crisis.

A Los Angeles Police Department captain was injured while assisting Buscaino's private security team in detaining the woman, according to the LAPD Officer Lizeth Lomeli, who said the injury was minor.

The woman, who was not immediately identified, told officers that the knife fell out of her pocket and that she carried the knife to protect herself from "rape," news video showed.

It was not immediately clear what occurred before the woman was detained, but the LAPD said that she was arrested on suspicion of assault with a deadly weapon.

"I am grateful for my safety, the safety of the public, and the quick action of the Los Angeles Police Department," Buscaino, who was unharmed, later said in a statement. "This is exactly why I was in Venice Beach today, charting a new course for our city, and I am convinced now, more than ever, that bold action is needed to make our city safer for everyone, regardless of housing status."

Buscaino announced on March 15 that he will run for mayor in 2022. The 46-year-old former police officer, who represents the 15th Council District, said he will focus his campaign on quality of life through improving public safety and addressing homelessness.

Why the homeless program in Rampart Village costs over $2,600 per person each month
EMBED More News Videos

A pilot program for the homeless called the Safe Sleep Village opened this spring in Rampart Village.

"Our city has devolved into a place where chaos is common,'' Buscaino said. "People tell me every day that they no longer feel safe in our city."