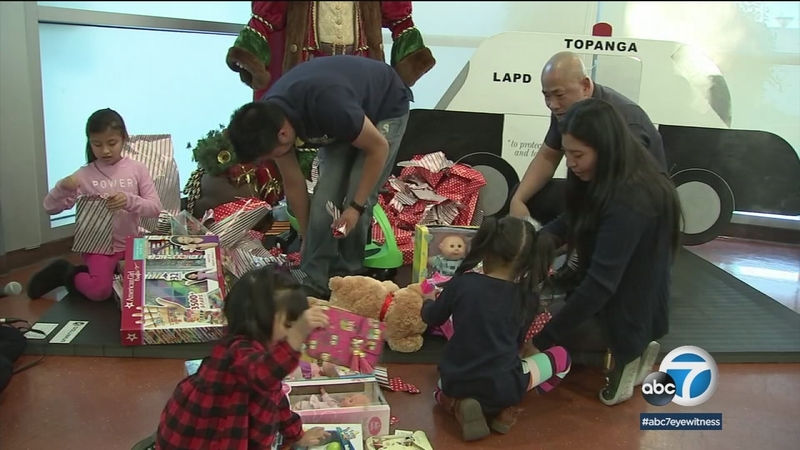 CANOGA PARK, LOS ANGELES (KABC) -- Three little girls who didn't think Christmas would be possible this year were given a holiday surprise.

Their squeals of delight and excitement could be heard as they opened presents during a party hosted by police officers at LAPD's Topanga station.

"It's nice of the police officers. They're kind. So kind that I've never had a time like this before," 7-year-old Carmen said.

A week ago, Tomas Tahvito's van was stolen from the family's home. It was filled with thousands of dollars in plumbing and construction equipment. Since that theft, he hasn't been able to work.

A few days ago, police arrested 22-year-old Jose Argueta and 32-year-old Hugo Castro. Investigators said each man was driving a stolen white van. Inside one of those vans, detectives found stolen merchandise that included most of Tahvito's tools.

But when officers realized the family's 7, 4 and 2-year-old daughters weren't going to have gifts, they took action.

"Since the children didn't get a great Christmas when their father was out of work, they secured dozens of gifts to give to these children and surprise them today," Sgt. Stephen Bell said.

At the end of the day, there were grateful parents and happy children.