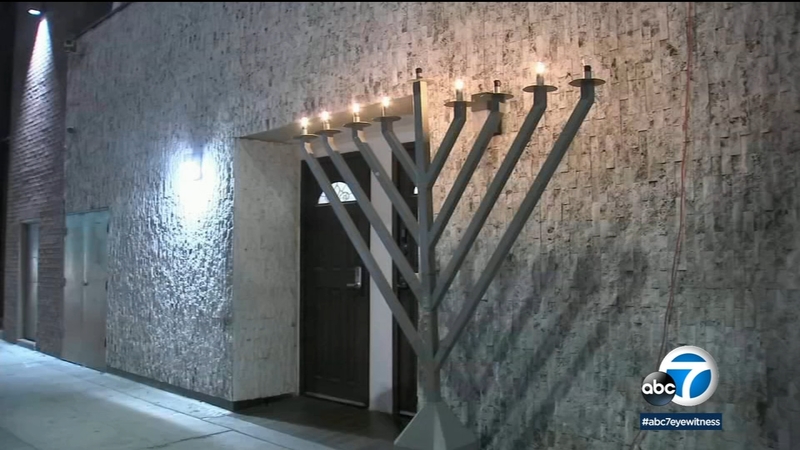 LAPD heightens patrols after stabbings at Hanukkah celebration in NY

LOS ANGELES (KABC) -- Synagogues across the country are increasing patrols in the wake of five people being stabbed as they celebrated Hanukkah in an Orthodox Jewish community north of New York City on Saturday.

It was shock and sadness in the Los Angeles Jewish community on the final night of Hanukkah in the wake of the violent attack.

Out of an abundance of caution, the Los Angeles Police Department stepped up patrols around L.A. area synagogues.

The LAPD stands with members of our Jewish community—Out of an abundance of caution, we have increased patrols in and around Jewish communities and places of worship in response to last nights horrific anti-Semitic attack in New York.

There is no place for hate in Los Angeles.

Two weeks ago in Beverly Hills, a suspect vandalized one of the city's largest Iranian Jewish synagogues in what official say was a hate crime.

Rabbi Marvin Hier, founder of L.A.'s Simon Wiesenthal Center, says he will be urging President Donald Trump to create a special task force to look into attacks against Jews and synagogues.

The local community says the hate has to stop.

"In America we celebrate religious plurality. We respect our differences, we respect our diversity, especially in a city like Los Angeles," said Dillion Hosier of the Israeli-American Civic Action Network.

L.A. has not seen the same kind of uptick but the local Jewish community says they are always on alert.

"We have security locks on the temple and we are afraid for our kids in schools, when they go to the temple by themselves on Shabbat, so it's sad," said Ovidiah Tank.