LAPD response to downtown unrest after Lakers win under scrutiny 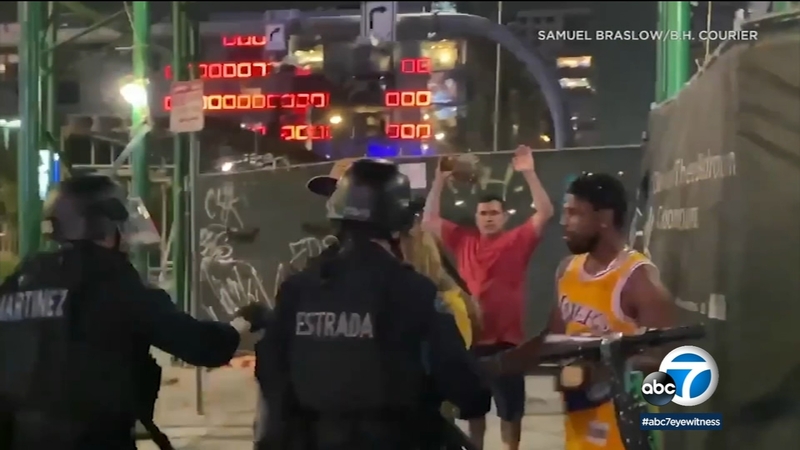 LOS ANGELES (KABC) -- A huge crowd descended on downtown Los Angeles after the Lakers' championship victory Sunday night, despite calls for them not to gather due to the COVID-19 pandemic.

And while most were there to peacefully celebrate, there were dozens of incidents of vandalism and graffiti and setting off of fireworks, leading to at least 76 arrests.

The Los Angeles Police Department says it declared an unlawful assembly after bottles, rocks and other projectiles were thrown at officers. One video captures a firework going off after it was thrown toward police.

Some questions are being raised as to whether police were prepared to handle the crowd and whether they employed the proper tactics.

Witnesses reported seeing people injured by the police less-lethal rounds, including one man who appeared to have lost some of his teeth.

"In this case the LAPD their pre-designated response units out there, ready for whatever may come their way. The hope is that nothing happens, that the night ends up being very peaceful and then everybody goes home happy. But unfortunately too often we see the few take advantage of the event and turn it into something that nobody wanted to see."

Police say 30 buildings and establishments were damaged as well as an MTA bus. Eight police officers were injured and three people were injured by less-lethal munitions fired by police.

"There's plenty of notice given to people who want to be lawful and leave the area," McDonnell said. "And then when the police do start to move through people as we saw in these videotapes stand in 20 feet in front of the officers or charge the line. I mean the expectation is that that you know that's not going to be tolerated."

The LAPD told Eyewitness News in a statement: "The Department was prepared for Angelenos to peacefully celebrate the Championship game. We deployed extra resources in the area to deal with traffic and other potential safety issues. We fully intended to allow our residents to enjoy this moment. However, when a large number of those revelers initiated dangerous, destructive, and violent behavior we were forced to initiate a tactical alert and pulled in officers from around the city to deal with the situation."