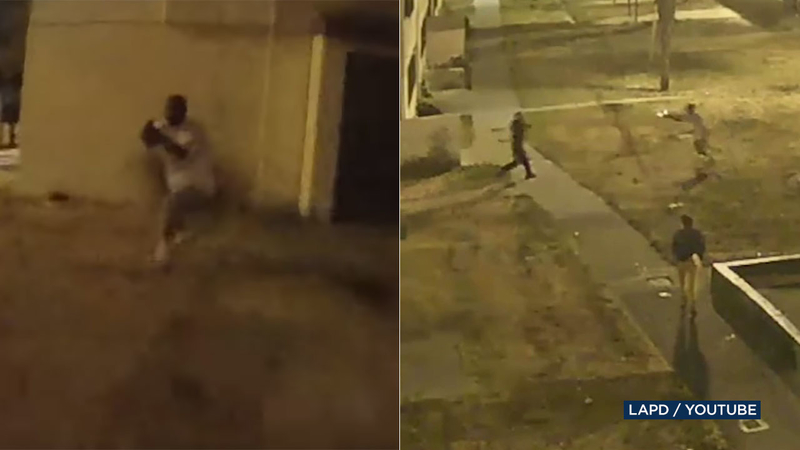 In the footage, a suspect can be seen surprising an officer who was chasing another man on foot. The suspect fires at the officer point-blank from only a few feet away and the officer immediately returns fire, dropping the suspect to the ground.

The April 20 incident started when officers pulled over a vehicle in the area of Long Beach Avenue and 52nd Street after it went through a stop sign.

The driver got out and fled on foot from the two officers, who reported to dispatch that he had a gun.

As the two officers chased the driver through the grounds of the Pueblo Del Rio public housing complex, another man - later identified as 39-year-old Curley Duff - appeared.

After the first officer ran by, video shows Duff pulling a gun from his waistband and firing several times at the second officer.

The officer returned fire and Duff collapsed to the ground.

The full video released Friday by the LAPD can be seen on YouTube here.

Warning: The video may be difficult for some to watch with its depiction of gun violence. Both the suspect and the officer who were shot did survive.

Body camera footage from LAPD officer Enrique Trujillo shows his perspective on the scary battle, including Duff pointing his gun directly at the officer and flashes going off from only a few feet away.

After returning fire, Trujillo is immediately on the radio to dispatch: "Shots fired, shots fired" then is heard telling his partner, "I'm hit bro, in my leg."

Trujillo can be seen in the bodycam footage later collapsing to the ground.

People in the housing complex can be heard screaming as the officers radio for a rescue ambulance. "We need an R.A. we got an officer shot. We got a man down."

Trujillo was raced to the hospital in a police car. Duff was taken later in an ambulance.

Investigators did recover the handgun Duff used in the shooting.

Duff has a lengthy criminal record that contains numerous arrests and convictions, officials say. He's now facing a charge of attempted murder of a police officer.

Trujillo is recovering at home.