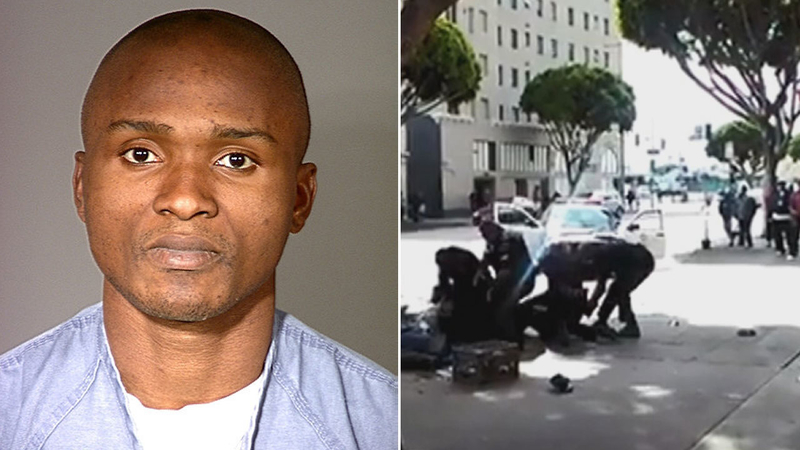 LOS ANGELES (KABC) -- The homeless foreigner who was killed in an officer-involved shooting on Skid Row had apparently stolen a French man's identity and was released from custody because no country would take him.

The LAPD identified the man as Charley Saturmin Robinet on Tuesday, a convicted bank robber who carried a French passport.

But French officials asserted that the 39-year-old man "is not French" and has never been a citizen of France.

The man had apparently applied for a French passport in the late 1990s under the assumed name in order to come to the U.S. to pursue an acting career.

"The real Charley Robinet is in France apparently living a totally normal life and totally unaware his identity had been stolen years and years ago," said Axel Cruau, the consul general for France in Los Angeles.

The identity complications came to light in 2013 when immigration officials sought to remove Robinet following his prison sentence for the Thousand Oaks armed robbery.

Because the man claimed to be a French citizen, U.S. Immigration and Customs Enforcement requested a travel document from French officials.

French consular representatives rescinded their travel document once they realized the man was an impostor.

The man later told authorities he was from Cameroon and gave the name Keunang, but officials from the African country didn't respond to repeated attempts by ICE to reach them.

VIDEO: LAPD officers shoot, kill man on Skid Row
VIDEO: Three Los Angeles police officers fatally shot a man on Skid Row during a struggle over one of the officers' guns. (WARNING: VIDEO IS GRAPHIC)
Immigration officials were forced to release him from their custody after 180 days of detention, Kice said.

The man was then ordered to a halfway house, where he stayed until he was released in May 2014.

It is not yet known what the true nationality or name is for the man killed by LAPD officers on Sunday.