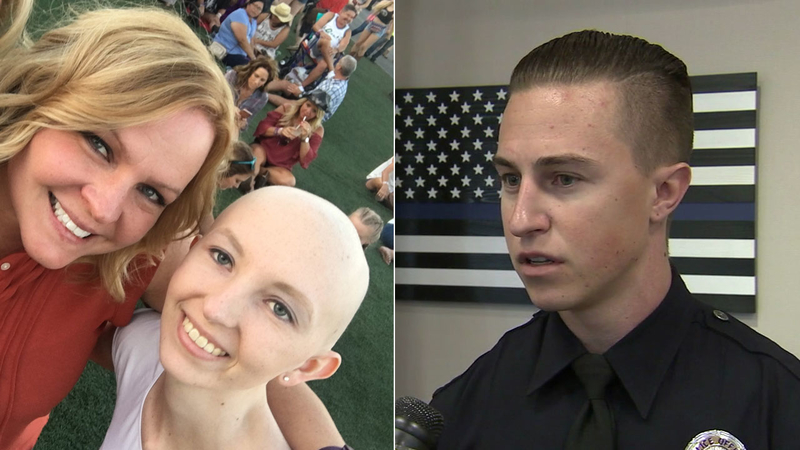 LOS ANGELES (KABC) -- A Nevada mother thanked an off-duty Los Angeles police officer for saving the life of her daughter, who has cancer, during the Las Vegas mass shooting.

"I really credit him for saving our lives that night," Kelley Huff said.

Cassidy Huff described the chaotic scene and how she and her mother were rescued.

"I think they're amazing and I think it's amazing that we ran into all off-duty police officers," she said. "I wanted to run but my body wouldn't let me. My legs are still really weak so they buckle under me. So it was very helpful for them to carry me."

The LAPD officer she thanks is Mitchell Tosti, who was at the concert with his fiance and six friends. By that time, he had already helped get one shooting victim into a car as they fled the gunfire.

"You could tell they were panicked. She looked tired, so I grabbed her. She was only wearing one shoe when I saw her. I was like, 'I'll carry you.' I told my fiance to grab the mom and follow us," he said.

They ran until they encountered a retired Long Beach officer, who drove Cassidy and her mom home. Tosti stayed behind again.

Tosti said he doesn't consider himself a hero.

"I just did what I felt needed to be done that I thought everyone else would do," he said. "There's plenty of other people that did way more than what I did, and those are the true heroes."

Kelley said that all the officers involved in the chaos, off-duty and on, are heroes.

"All the police officers there are heroes. From Metro, all the off-duty officers, I mean, you could tell they were officers that you were dealing with, they all are," she said.