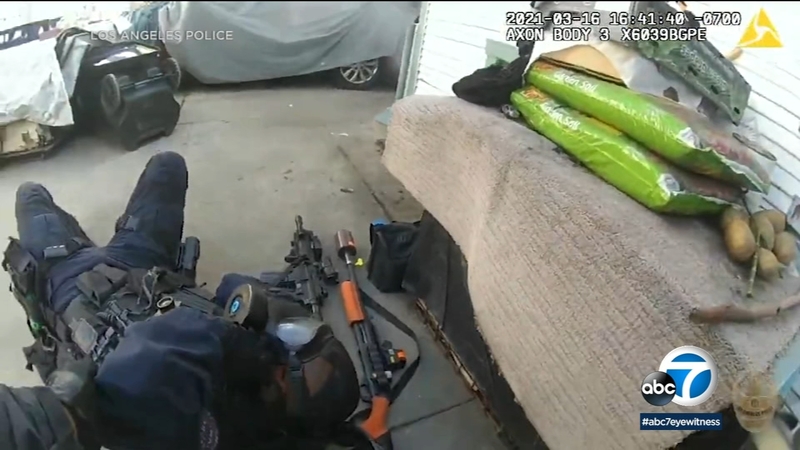 EXPOSITION PARK, LOS ANGELES (KABC) -- The Los Angeles Police Department has released body camera footage of an intense exchange of gunfire in which a SWAT officer was shot in the face and a suspect was killed following an hours-long standoff in Exposition Park.

The March 16 incident started when LAPD officers and a SWAT team responded to the 1000 block of West 21 Street after reports of a man firing a rifle into the air in the backyard of a home, according to the department.

Police attempted to persuade the man to surrender and exit the home near USC that he was holed up in, but when the suspect refused, the SWAT team deployed tear gas into the residence.

In the footage, which is graphic and could be disturbing to some viewers, the SWAT officers called for the suspect to show his hands from around the corner of the home when a single shot can be heard going off.

A SWAT officer was shot and a suspect was killed in an exchange of gunfire after an hours-long standoff in Exposition Park Tuesday afternoon, Los Angeles police said.

The approaching officers then can be seen backing away from the corner.

"I got hit in the vest," one of the officers is heard saying.

In the video, the barricaded man continues to fire and, once again, the officer who was hit in the vest yells for the suspect to show his hands and tells another officer behind him that he can't see the suspect.

At that point, commanders decide that more tear gas should be fired.

Shortly after, the lead officer rounding the corner is shot and is seen falling to the ground. Another officer drags him away and he bleeds from a bullet wound to the face.

Another SWAT officer engaged with the suspect and opened fire, ending the gun battle. Police say 36-year-old Jorge Armando Cera of Los Angeles was pronounced dead at the scene.

The department also says a long rifle and a handgun were recovered at the scene.

The officer who was shot was taken to the hospital and was listed under stable condition. He is expected to survive his injuries.