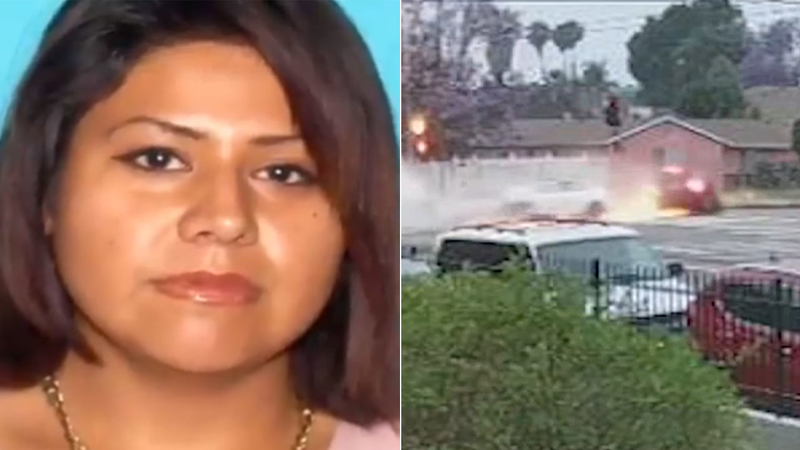 NORTH HILLS, LOS ANGELES (KABC) -- Police released new details Tuesday in what led to the arrest of a woman who allegedly walked away from a deadly crash in North Hills, where she was last seen before fleeing the country just hours later in June.

Maritza Lara, 27, who has a prior DUI conviction, was allegedly speeding when she ran a red light at Haskell Avenue and Parthenia Street at about 5:35 a.m. on June 16 and struck the driver side of an SUV.

Passengers who were in the suspect's vehicle were interviewed at the scene and identified Lara as the driver, police say.

Detectives searched for Lara at her residence, where they discovered she had already fled to a Greyhound bus station in downtown Los Angeles and bought a ticket for Calexico, California. Investigators in Calexico determined that Lara then crossed over the border into Mexico.

Los Angeles police reached out to the community, which provided several tips that led authorities to an address in Chiapas, Mexico. Lara was taken into custody with help of a U.S. Marshals Task Force and immigration authorities on Aug. 15 and deported from Mexico on Aug. 17.

The victim's wife spoke at a press conference Tuesday in Panorama City, where she said she holds no resentment toward Lara and asked for justice for her husband, who she described as a great son and father. She also emphasized the dangers of drunken driving, urging those who do so to reconsider, as it may end in the same devastation her family is currently enduring.

Police released dramatic video of the Father's Day crash that showed a woman calmly walking away from the scene after killing the driver in the other car and leaving four passengers in critical condition.

"You can imagine how it's Father's Day, their dad is no longer here," LAPD Det. Lisset Fuentes said at the time. "He was just driving on Parthenia, I believe he was on his way to church, so just an innocent person that got killed."

One of the four passengers that the suspect left severely injured in her car was her own sister.

Detectives found numerous open cans of beer in the suspect's crashed Lexus and say alcohol may have been a factor in the wreck. Investigators added speed was a factor in the crash.

Lara is expected in court this week.

She is facing several charges, including murder, deadly hit-and-run and driving under the influence, authorities said. Detectives are also looking at possible charges against some of Lara's family members who may have helped her escape by driving her to the bus station.