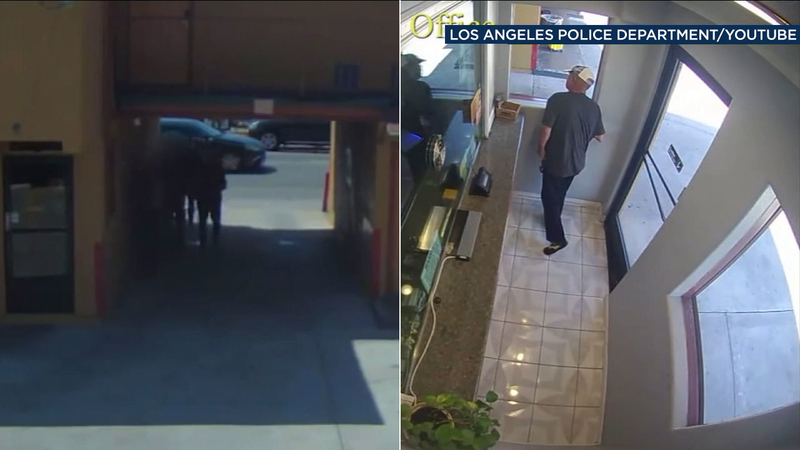 The shooting occurred at the Central Inn Motel in the 4000 block of South Central Avenue on August 7.

A fugitive task force consisting of LAPD officers and FBI agents were attempting to arrest Daniel Valdez, 70, for a murder of a relative that happened in July in South LA.

Video released shows Valdez talking to a receptionist at the lobby of the motel when he spots the members of the task force approaching.

Valdez is seen in the video pulling something out of his pocket and exiting the lobby.

In the released video, LAPD freezes the action at one point, zooming in to show the gun that Valdez is holding as he points it toward the officers.

The suspect, a gang member who had an outstanding warrant, was armed with a firearm when authorities located him in the motel's parking lot, police said.

The exchange left one FBI agent with a gunshot wound in his left wrist.

Valdez was pronounced dead at the scene.

The weapon, a .38 caliber revolver, was recovered in the parking lot.

"After the investigation is completed, the chief of police will forward his findings to the civilian Board of Police Commissioners, who will evaluate the evidence to determine whether the officers' tactics and use of force met the high standards expected of all LAPD officers," LAPD spokesman Josh Rubenstein said in the video released.

The surveillance video shows the shooting from three different angles.