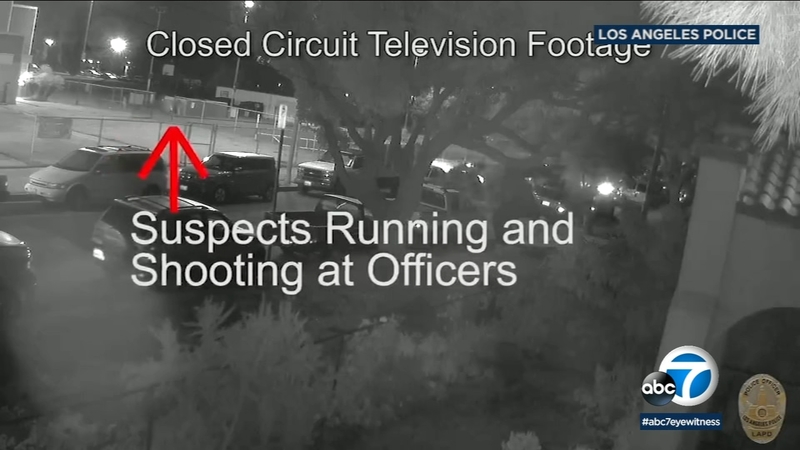 Los Angeles police posted the video to YouTube on Wednesday.

According to LAPD Public Information Officer Josh Rubenstein, the Nov. 11 incident happened as officers were on their way to the scene of a shooting.

Harbor Division officers were on patrol when they drove south on Halldale Avenue and heard gunshots coming from the direction of a recreation center. Two suspects then emerged from the building. As officers turned into the parking area, the suspects ran in the direction of officers while shooting at them, Rubenstein said. Officers then returned fire.

The passenger officer got out of the patrol car and engaged in the officer-involved shooting. One suspect, identified as 18-year-old Jose Vargas, was hit by police gunfire and fell to the ground with non-life-threatening wounds. He was hospitalized before being taken into custody, police said.

The second suspect, a 17-year-old whose name will not be released, ran for a nearby park while also suffering from a gunshot wound to the upper back, Rubenstein said. The juvenile was arrested days later after investigators determined the juvenile was involved in the shooting.

No officers were struck in the incident, but the exchange of gunfire left a bullet hole on a patrol vehicle.

The responding officers found two victims from the initial shooting call behind the recreation center. One of the victims was a young girl suffering from a gunshot wound to the leg. Officers also recovered a handgun near the area where Vargas fell to the ground, Rubenstein said.

The LAPD said it will continue to investigate the incident as new information and suspects come forward. The chief of police will then forward a recommendation to the civilian board of commissioner, who will determine whether the officers' tactics met standards.
Report a correction or typo
Related topics:
harbor gatewaylos angeleslapdgun violenceofficer involved shootingshootingcaught on camera
Copyright © 2021 KABC-TV. All Rights Reserved.
More Videos
From CNN Newsource affiliates
TOP STORIES