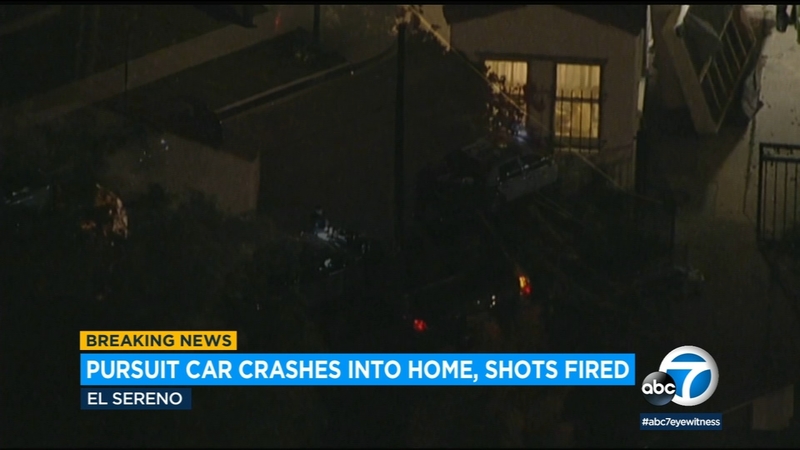 Chase ends after LAPD shoot suspect who crashed into home

EL SERENO, LOS ANGELES (KABC) -- Los Angeles police shot and wounded a suspect after a short chase ended with the driver crashing into a home in El Sereno Friday evening.

The shooting occurred in the area of Chester Steet and Bullard Avenue around 7 p.m. after the suspect sped away from officers during a traffic stop, according to LAPD.

AIR7 HD was over the aftermath of the pursuit and captured aerial footage of the vehicle that went over a front lawn and crashed into the home.

Police say the suspect exited the vehicle with a handgun, prompting at least one officer to open fire.

The suspect was struck and transported to a hospital in stable condition.

Officers say they initially stopped the vehicle at Ithaca Avenue and Haven Street for an equipment violation, but the driver backed the car toward officers and fled.

LAPD also says the suspect's handgun was recovered at the scene.

The shooting is the fifth this week involving LAPD officers opening fire.

Earlier on Friday, officers shot and wounded a man who was allegedly armed with a hammer and a hatchet in the Westlake District. In that incident, a sergeant and supporting officers followed the man for several blocks while giving him commands after they were flagged down by a woman who said she was concerned about a man who appeared to be armed.

The officers used less-lethal methods against the man which proved ineffective, LAPD said. Officers shot the man on Bonnie Brae Street between Sixth Street and Wilshire Boulevard, according to LAPD Officer Mike Lopez.

The man was transported to a hospital in unknown condition.