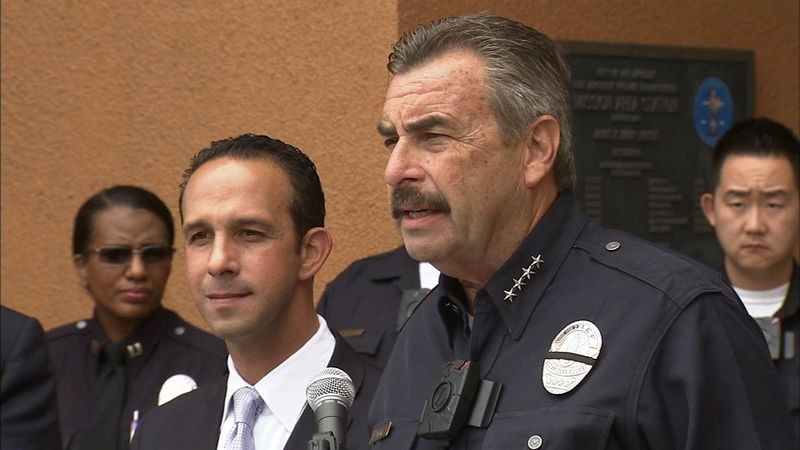 LOS ANGELES (KABC) -- Thirty-nine people were murdered in Los Angeles in August, marking the deadliest month in the city in eight years, according to the LAPD.

A major effort is currently underway to try and curb this burst of deadly street violence, most of which took place in South Los Angeles.

The latest example occurred early Friday morning. One person was killed and two others were wounded in an apparent car-to-car shooting in the 9400 block of Central Avenue in South L.A.

The shooting was part of a recent wave of bloodshed sparked by a troubling surge in gang violence.

"The LAPD isn't just sitting back on its hands. We're sending additional officers into the communities that need them most," said L.A. Mayor Eric Garcetti at a Friday news conference.

The city plans to mobilize patrols from other departments throughout the city and redeploy them to areas where the recent spike in gang violence is the worst.

"I personally met with the command staff from South Bureau on Tuesday, went over their plans, their strategies for dealing with this uptick over the past month," said LAPD Chief Charlie Beck. "I believe in their strategies. They've opened up a command center that is staffed by a captain or above 20 hours a day. They're adjusting resources citywide to meet hot spots."

As for why there's this troubling spike in gang violence, Garcetti said it's possibly retribution killings and gang-on-gang violence.

Activists say they are very disturbed by the bloodshed in South L.A.

"It's time for the clergy to take the community back from hoodlums and others that are decimating our community," said the Rev. William Smart. "We are honorable people in our community, and it's time for us to take a stand."