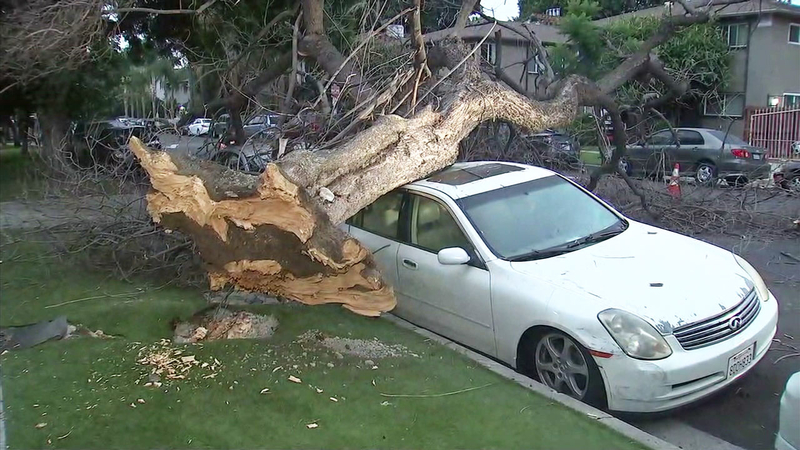 HOLLYWOOD, LOS ANGELES (KABC) -- A large tree fell onto and damaged two cars in Hollywood Saturday, and the incident was caught on video.

Drew Kocak took pictures of the tree slowly sinking deeper into the roof of his 2004 Infiniti, parked on Garfield Place, near Franklin Avenue.

"Just a little bit of rain and it fell over," he said.

He lives down the street and found what he thought was an ideal parking spot until the tree crushed his vehicle.

24 hours after this massive tree toppled over onto two parked cars, owners are still waiting for @LADWP crews to come and remove them. One of the owners says the weight of the tree continues to crush his car and that there’s a lot more damage now than there was initially. @ABC7 pic.twitter.com/eiE5zPymla

"I had just parked the car and then I went to go home," he said.

Moments after he got into his apartment, surveillance video caught the tree falling over and slamming into his vehicle and the one near it.

"One of the traffic officers told me I should file a claim with the city," he said.

The reason for the tree falling is the roots.

"The tree - the roots obviously aren't very strong and they should have been longer. But apparently whenever they put in the new sidewalks, they cut off the roots so that the sidewalk lies flat," he said.

It's something that caught the attention of the apartment manager more than a year ago.

"We knew already that this could be an issue because (the roots) were dry and with this fungi thing," Anastasia Voit said.

The person she contacted through the city's 311 service said there wasn't any budget money for the tree removal.

On Saturday, Kocak said the city's public works department told him they've been busy removing trees, limbs and debris from all over because of Friday night's freak storm. It brought heavy rain, lightning and even thunder in a lot of parts of the Southland.

But Kocak realizes how lucky he is and isn't giving up on getting the city's help.

"I mean there's a tree that belongs to the city on top of my car so hopefully they can do something about that," he said.

He doesn't have comprehensive coverage, which means that weather-related incidents are not covered.

Los Angeles Department of Water and Power crews put up barricades to block off the tree and will be back Sunday to clean up the mess. As of Sunday morning, Kocak said he was still waiting, and the roof of his car is continuing to get crushed.