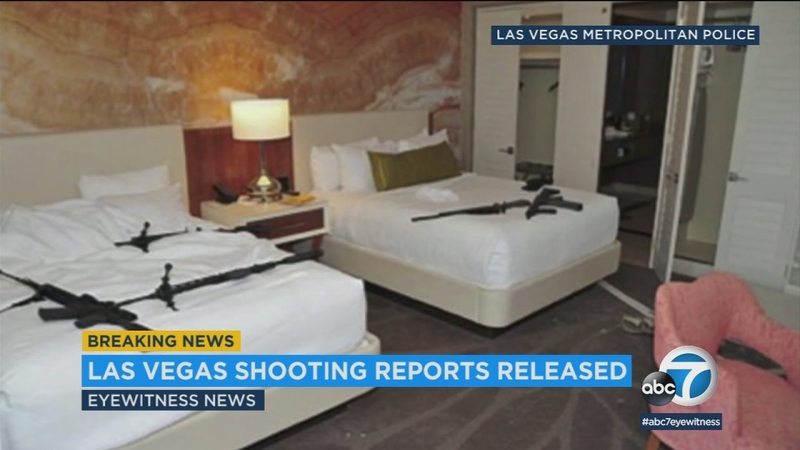 LAS VEGAS -- Police documents released Wednesday about the deadliest mass shooting in modern U.S. history included reports from at least two people who said a person they believed to be the gunman ranted in the days prior to last October's Las Vegas Strip attack about the federal government and gun control.

The claims by those people and others could not be verified because the names of all witnesses were blacked out in the 1,200 pages of police reports and accounts that the Las Vegas Metropolitan Police Department made public after losing court battles to keep them secret.

A coalition of media outlets, including ABC, sued to obtain videos, 911 recordings, evidence logs and interview reports to shed light on the response by public agencies, emergency workers and hotel officials during and after the shooting. The department has not provided all the materials it collected.

Police and the FBI have not determined a motive in the ongoing investigation. Authorities said they believe Paddock acted alone and the attack had no link to international terrorism. Law enforcement refused Wednesday to provide any additional information including refusing to say whether the reports were credible.

A jailed man whose gave a statement in November to police and the FBI recalled a man he believed to be gunman Stephen Paddock telling him that Federal Emergency Management Agency "camps" set up after Hurricane Katrina in 2005 were "a dry run for law enforcement and military to start kickin' down doors and ... confiscating guns."

"Somebody has to wake up the American public and get them to arm themselves," the man said Paddock told him less than a month before the Oct. 1 shooting that killed 58 people and injured hundreds. "Sometimes sacrifices have to be made."

In a handwritten account, a woman said she overheard a man she later said was Paddock talking with another man at a Las Vegas restaurant just three days before the massacre. She told police that Paddock seemed angry about the 1990s standoffs at Waco, Texas, and Ruby Ridge in Idaho.

"At the time, I just thought 'strange guys' and I wanted to leave," said the woman.

The documents released Wednesday detailed terror, confusion and compassion among people helping the wounded after gunfire rained from a 32nd floor hotel room on a crowd of 22,000 people attending the Route 91 Harvest Festival concert on the Las Vegas Strip.

One woman told police she refused to leave her lifeless friend, whose eyes were still and lips turned blue, until a group of men picked her off the ground and guided her to a fence. One left a red bandanna on her friend's face.

A stagehand made a run for his pickup truck when he was suddenly surrounded by people begging for a ride away from the scene.

"I told them to get in however they could," he said.

A woman who fell wounded said another woman who pushed her was shot five times. She decided to play dead.

"A good guy just grabbed me and said, 'Love, you're gonna die here if I leave you here,'" she told police.

A housekeeper at the Mandalay Bay described her discomfort at Paddock sitting at a table eating soup and staring at her as she cleaned his hotel room four days before the shooting.

Clark County Sheriff Joe Lombardo said early this month the police investigation was not finished. He also apologized to the public for the release of information that he said would "further traumatize a wounded community."

Police and the FBI refused to answer questions from The Associated Press about the account from the man who said he met with Paddock outside a Las Vegas sporting goods store after posting an online ad to sell schematics to convert semi-automatic guns to fire automatically.

The man said Paddock became upset and launched into a tirade about gun control when the man rejected an offer of $500 apiece to modify semi-automatic guns to fire automatically.

Clark County Commission Chairman Steve Sisolak, who shared the release of public information with Lombardo and FBI Special Agent in Charge Aaron Rouse after the shooting, told the AP on Wednesday he had been assured that no motive has been identified.

Sisolak said he hadn't heard of the jailhouse account and he could not say whether it was credible.