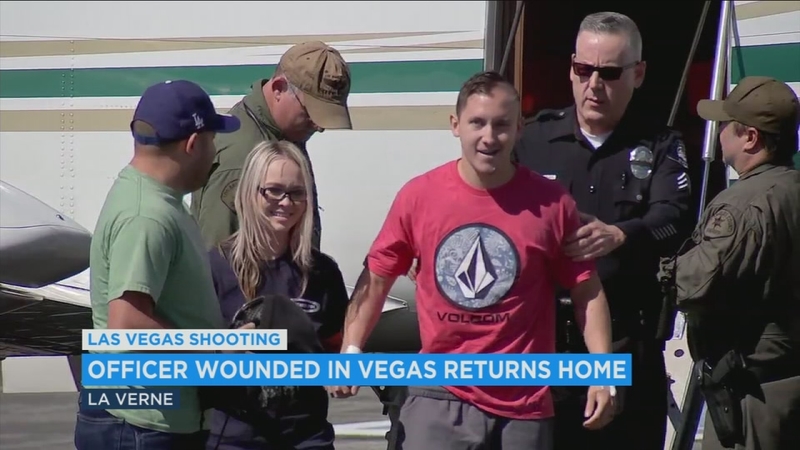 Ontario officer who was shot in head in Vegas returns home

LAS VEGAS (KABC) -- An Ontario police officer who suffered a gunshot wound to the head while he was attending a country music festival in Las Vegas has been released from the hospital and has returned to Southern California to continue his long recovery process.

Officer Michael Gracia was one of nearly 500 injured Sunday when a gunman opened fire from the 32nd floor of the Mandalay Bay Resort and Casino into a crowd of thousands below, killing 58.

Gracia was at the concert with his fiancee, Summer, when the shots rang out. Summer was also shot when she jumped on top of Gracia.

"She sheltered him, and she saved him from another gunshot," said the officer's mother, Renee Gracia.

Officers from San Bernardino County and Ontario were struck by gunfire at a country music festival in Las Vegas Sunday.

Gracia made swift progress in his recovery after his devastating injury, steadily showing signs of improvement just days after he sustained the wound. He was able to get out of his hospital bed and walk by Wednesday.

The officer was flown from Las Vegas to Bracket Field in La Verne Friday with his fiancee and his brother, where he was met and welcomed by fellow members of law enforcement, as well as family and friends. The couple's 3-month-old daughter also made an appearance at the air field.

Ontario Police Officer Michael Gracia, one of nearly 500 injured Sunday at a mass shooting in Las Vegas, is seen walking at the hospital as he begins his recovery.

After his homecoming, Gracia was transported from the airfield to a rehabilitation center for additional treatment, according to Ontario police.