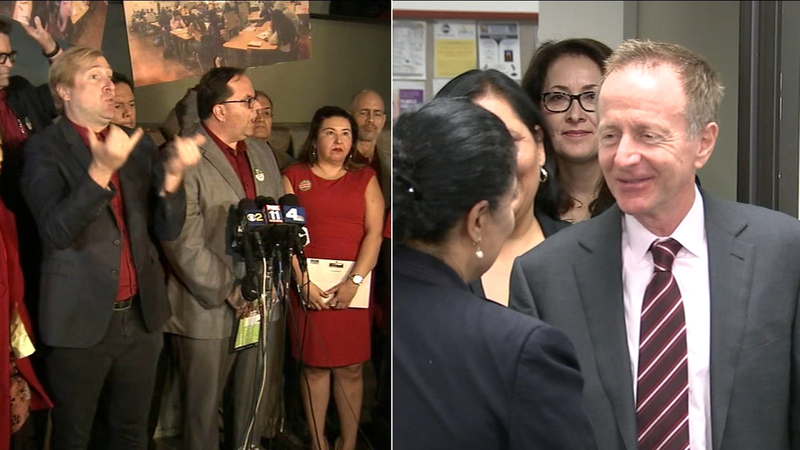 LAUSD's new offer to UTLA included a $130 million investment in 2019-2020, which the district said would have added 1,200 more educators and reduced class sizes in middle and high schools by two.

"There's a variety of reasons why the proposal today was unacceptable," said Alex Caputo-Pearl, UTLA president. "Raising class sizes is one of them. An unacceptable level of additional staffing is another reason why this is unacceptable, and the fact that even those new staff would be in for one year..."

The LAUSD released the following statement on Twitter, asking the teachers union to reconsider: "We are extremely disappointed that UTLA has rejected @LASchools revised offer without proposing any counter offer. UTLA has refused to continue contract negotiations. More than 48 hours remain until Monday when UTLA plans to strike, and we implore UTLA to reconsider."

We are extremely disappointed that UTLA has rejected @LASchools revised offer without proposing any counter offer. UTLA has refused to continue contract negotiations. More than 48 hours remain until Monday when UTLA plans to strike, and we implore UTLA to reconsider.

The union said that if the district comes forward with a substantially different proposal, it's willing to look at it before Monday.

The district and the teachers union are at odds over the size of a proposed raise, along with how much money should be spent to add support staff, reduce class sizes and other issues.

The UTLA wants a 6.5-percent raise that would take effect all at once and a year sooner.

It also says it wants "fully staffed'' schools with more nurses, librarians and counselors added to the payrolls, along with pledges to reduce class sizes.

LAUSD's new offer came after a significant funding boost by both the state and L.A. County, which Buetner said threw in another $10 million for school staffing.

See the offer's details below:


Buetner discussed the new proposal during a Friday afternoon press conference, during which he also announced that the district will officially ask Gov. Gavin Newsom to help resolve the situation.

"UTLA's proposals are unchanged since April of 2017. They know we cannot meet those demands. The county has said we're on the precipice, the county has said we cannot meet those demands, so we'd like the governor to step in, bring the parties together, keep us in a room, lock the door and throw away the key if he has to, so we can reach a resolution and avoid a strike," Buetner said.