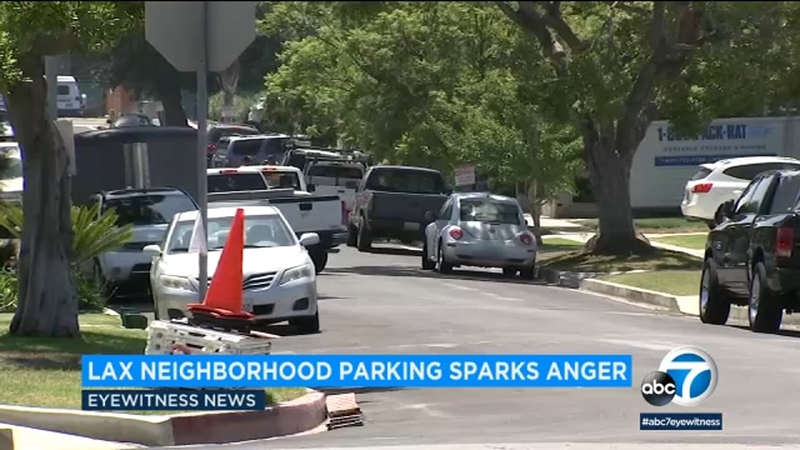 LAX neighbors aim to stop travelers from parking on their streets

"The situation is the parking has really gotten out of control," said long-time Campion Drive resident Matt Lipschutz. "I can't park in front of my own house. Yesterday, I had to park down the block, around the corner."

Lipschutz pointed out a car parked in front of his house and said it has been there for two weeks.

It's just one of dozens of vehicles left on his street regularly and throughout Westchester belonging to LAX travelers who park their cars, then Uber to the airport for just a few bucks.

"It's even come to the point where I'll see that happening and folks are grabbing a bag, leaving their car and I'll come outside and nicely ask them to leave but it's kind of that Catch-22," Lipschutz said. "You don't want to make anybody mad then they know where you live. We've had that happen before too, acts of vandalism."

"I mean, they're public streets so everyone has the right to park here," Bronk said. "On the other hand, it's clear these (are) people that don't want to pay to park at LAX so they probably should just park over there with everybody else."

It'll cost you $96 to park your car in economy Lot E for one week, and as much as $320 if you park at one of the terminal parking structures, according to the airport's website. Compare that to a $10-12 Uber fare.

In fact, it is free and legal to park on most Westchester and Playa del Rey streets for up to 72 hours. Which is why residents say they wait to report unfamiliar cars.

Lipschutz explains,"in most cases we're not even reporting it until it's been a couple days, then they come out and mark the tire. Then you have to wait a few days but even then we're not seeing a response time like we should."

Some neighbors say parking enforcement will come out and cite cars but not always right away and sometimes the offending cars are moved before they are cited or towed.

City Councilman Mike Bonin said, "The abuse and theft of parking in neighborhoods near LAX by airline passengers and airport employees is unacceptable. I have supported and will continue to support my constituents by establishing preferential parking districts and stepping up parking enforcement - And by creating easier and more convenient ways for people to get to the airport without a car."