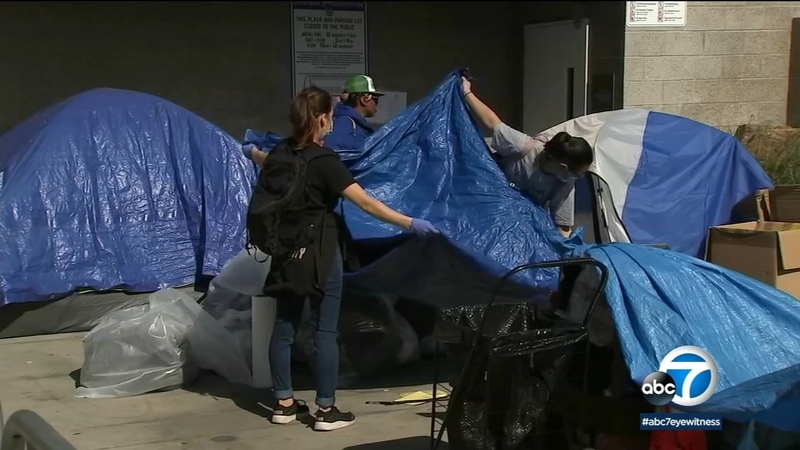 LITTLE TOKYO, LOS ANGELES (KABC) -- Another one of Los Angeles's big homeless encampments is about to be cleared. The city Thursday will close and fence off a Little Tokyo plaza that has become the site of a large homeless encampment during the pandemic, but the plan has drawn protests from some local homeless advocacy groups.

L.A. city councilman Kevin de Leon's office said that Toriumi Plaza, located at First and Judge John Aiso streets, is being closed for maintenance, electrical repairs, landscaping, permanent fencing and other ancillary work. It's not clear when the plaza would be reopened.

Since Feb. 16, the Los Angeles Homeless Services Authority has conducted outreach and brought 55 people from the plaza into shelters, though an estimated 25 to 30 people still remained, de Leon's office said Wednesday.

J-Town, along with We The Unhoused and Ktown for All, protested with dozens of people on Sunday and another rally Thursday morning, ahead of the city's closure of the plaza at 10 p.m. By sunrise, crews had already set up metal barriers around the plaza.

Signs now hang from those barriers that read things like "Care not cages" and "Housekeys not handcuffs."

A woman, who goes by Halo, has been on the streets for 15 years.

"We are trying to change and be positive people in life and society," Halo said.

Brian Kito is not only the president of the Little Tokyo Public Safety Association, he also owns the oldest business in the area, the Fugetsu-Do Confectionery. He, like most business owners, are grateful, ready to get rid of the fights, needles and broken windows.

"The last two years with the encampment has created a lot of havoc down here," Kito said. "My employees used to go there on a nice spring day to have lunch and now you don't even want to walk by that place."

The cleanup is similar to efforts that have happened in Echo Park and MacArthur Park.

De León's office says no level of force will be used to clear the encampment. Eventually, a permanent fence will go up, allowing the location to be open during daytime hours only.

J-Town Action doesn't like anything the city is doing. Chun calls it a crime against humanity, comparing it to the interment of Japanese Americans.