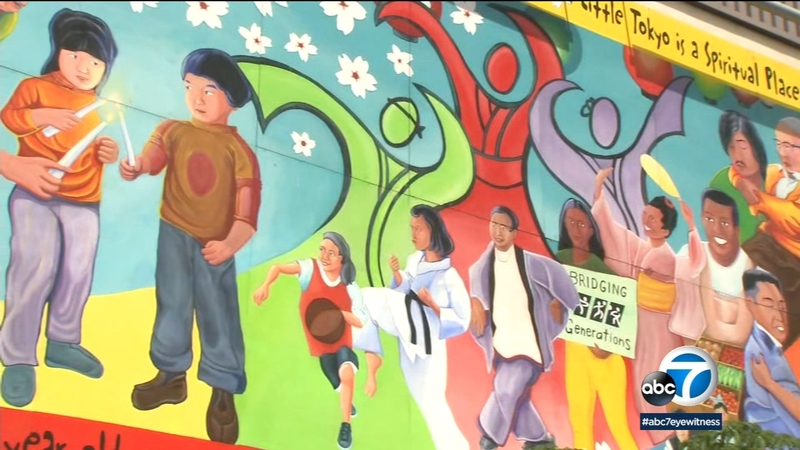 LITTLE TOKYO, LOS ANGELES (KABC) -- A rededication ceremony in Little Tokyo for a mural that was defaced was held Saturday.

Some members of the community call the defacement a hate crime, but they are now using it as an opportunity to reinforce who they are and their strength as a community.

"This community is over 130 years old. If you are just coming through, you might not know that beautiful rich history," artist Tony Osumi said. "This mural shows that history."

Japanese Americans are fiercely proud of their history. From the early days of immigration, to the tragic internment camps of World War II, to modern times celebrating culture and tradition.

The mural is the heart and soul of Little Tokyo.

In 2005, 500 members of the community helped paint it, including former City Council member Jan Perry.

"It says a lot about the interconnectedness of the Little Tokyo community, and how much people care about it thriving, and growing and people being together," Perry said.

So, when last year taggers defaced it, it was like putting a dagger through the community's heart.

Surveillance video shows the four suspects who climbed up in the middle of the night and defaced it.

"I felt sick to my stomach," Osumi said. "I knew it could be refurbished....it was terrible. I couldn't drive by."

Brian Kito, the organizer of the ceremony and president of the Little Tokyo Public Safety Association, calls it a hate crime.

"We were very insulted when it was tagged. For us, it's a very personal thing for them to tag this mural," Kito said. "One, to even tag any mural, but this one in particular because it's about our Japanese heritage."

So far, Los Angeles police has only made one arrest in the case.

They are still trying to identify the three others.

In the meantime, like so many other difficult moments in their history, the proud citizens have responded by forging ahead.

They've repaired the mural, even devoted a plaque to the woman who spearheaded its creation, Nancy Kikuchi, who has since died.

It has been difficult, but also unifying.