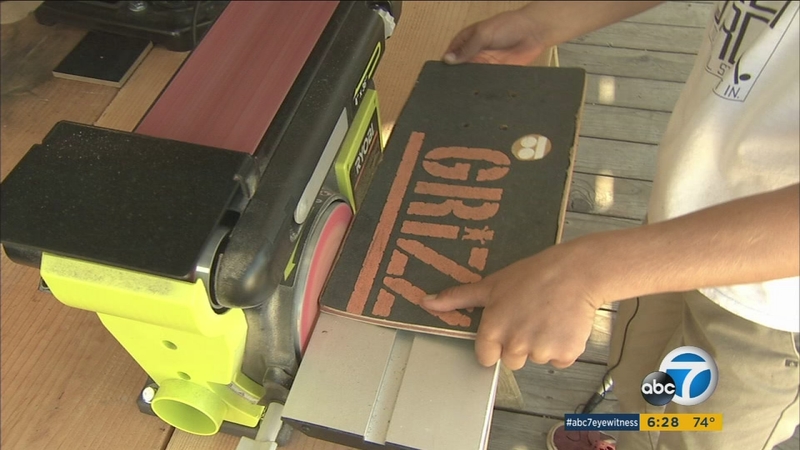 SAN CLEMENTE, Calif. (KABC) -- An enterprising boy with a passion for surfing and skateboarding has come up with a novel way to pay for it all.

Eleven-year-old Carson Kropfl is a street-smart kid making waves on the surf and in the business world.

Carson loves to surf. He does if for fun, for competitions, and he does it a lot.

But even though the waves are free, Carson and his family came to realize that surfing is not.

Carson's parents thought paying his own way would be a good life lesson for their son, but how could a preteen come up with that kind of cash?

"My parents told me I had to do chores to pay for my surf contests and surf lessons," Carson said.

He wasn't a fan of cleaning, so the chores idea was out, but he still needed the cash.

Then he realized he had a potential money-making problem he could solve: His skateboard didn't fit inside his locker at school.

Out came the saw, the sander and the drill, and Carson's new company, Locker board, was born.

"I just wanted these to really fit in lockers, and it's a board, so, Locker Board.

Carson began collecting old skateboards -- chopping them down, smoothing them out and selling them as backpack-friendly, locker-fitting boards.

"After school I'll spend an hour making them, then on the weekends I'll spend like five hours," the preteen said. "By the end of the week, I can make like 50 boards."

A handful of local skate shops have given Carson old, abandoned decks, and his parents have given him some old important advice: Even though his company is all about skating, there's no skating through the business world.

"We've made him write a business plan, gone over profit and loss with him, so he's having to understand really important life lessons at an early age," said Carrie Kropfl, Carson's mother.

Now, Locker Board is literally on a roll. Since starting the company just a couple of weeks ago, Carson's sold 25 of the mini boards across the country.