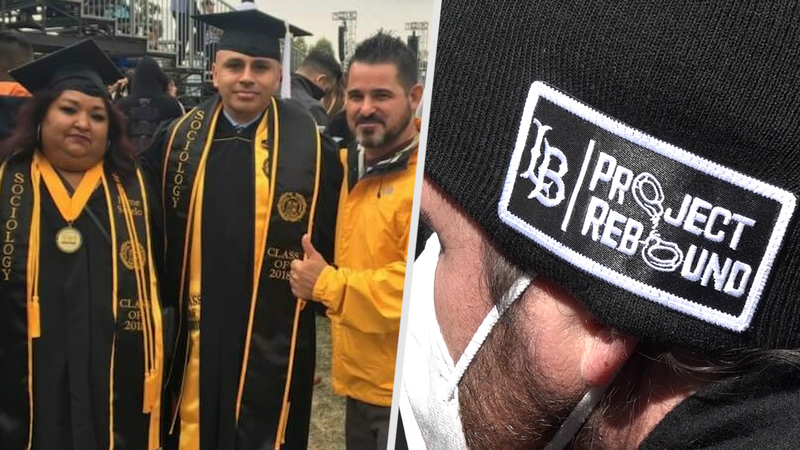 "In 1999, I wrecked a car I was drinking and my best friend sitting next to me got killed," Binnall said. "For that horrible decision. I ultimately spent four years one month and six days in two maximum security prisons in Pennsylvania."

Since then, Binnall received his Juris Doctorate, his LL.M. and his Ph.D. Today, he is the Executive Director of Project Rebound at CSULB.

SEE MORE: Man who spent half his adult life in prison graduates with honors from Cal State Long Beach

"Project Rebound is a statewide initiative that began at San Francisco State University back in the 1960s," Binnall said. "We try to recruit and then support formerly incarcerated students as they progress through and ultimately achieve their goal, which is an undergraduate degree."

Binnall said the organization helps students with meal vouchers, books, transportation, parking and other issues that may arise on campus.

"That community, that support, is something that's essential for folks that are looking to use education and to move their life in a positive direction," Binnall said.

Project Rebound coordinator Irene Sotelo is proud to be part of that community.

"I dropped out of school in seventh grade and I lost my mother to suicide. I was the oldest of five children and I got involved with gangs," said the Norwalk native.

"I was living a really dangerous lifestyle and I finally ended up getting arrested," Sotelo said.

Sotelo turned her life around in prison. At age 51, she received her Bachelor's degree from CSULB. At 56, the mother of two will achieve her Master's degree in social work.

"We're one big family," Sotelo said. "We all have our stories, but we also have ways to show you how to get ahead, change your life and rehabilitate yourself."

To learn more about Project Rebound, visit their website.