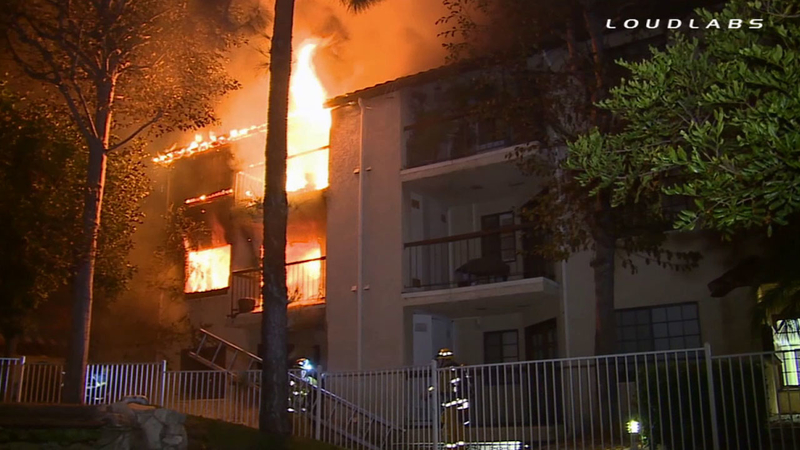 LONG BEACH, Calif. (KABC) -- A handful of people were displaced from their homes on Thanksgiving Day after a fire erupted at a three-story condominium complex in Long Beach.

The three-alarm blaze erupted in the 5400 block of Centralia Street, near Bellflower Boulevard, around 3:30 a.m.

Responding firefighters found the second- and third-floor well-involved. The flames moved upward through the building, affecting at least seven units.

Residents scrambled to get to safety.

"I looked out my window and there was a ladder with a fireman on it looking, walking right up, past my window," said resident Mary Hopman.

It took about 60 firefighters less than an hour to fully extinguish the blaze. A dog in one of the second-floor units where the flames originated was killed.

At least one firefighter received minor burn injuries to his face and chin. He was transported to a local hospital for an evaluation.

The Long Beach Fire Department handed out gift cards to families whose homes sustained at least 25 percent damage. Long Beach firefighter Jake Heflin says the effort is part of a new program called SAVE (Supplying Aid to Victims of Emergency).

"Obviously, today being Thanksgiving, it's always difficult to see families struggle through this," Heflin said.

Many residents forced to change their Thanksgiving Day plans are now relying on friends, family and the community. The Red Cross is also working to find temporary homes for those who were displaced.

"The people that weren't directly affected have been very generous, offering anything from food to clothes," said resident Michael Galant, who was displaced by the fire.

And for Galant, the community's efforts are just enough to help keep his spirits up.

"It seems like, you know, at this point, the worst is just a lot of time and money, but it could be a lot worse," Galant said.