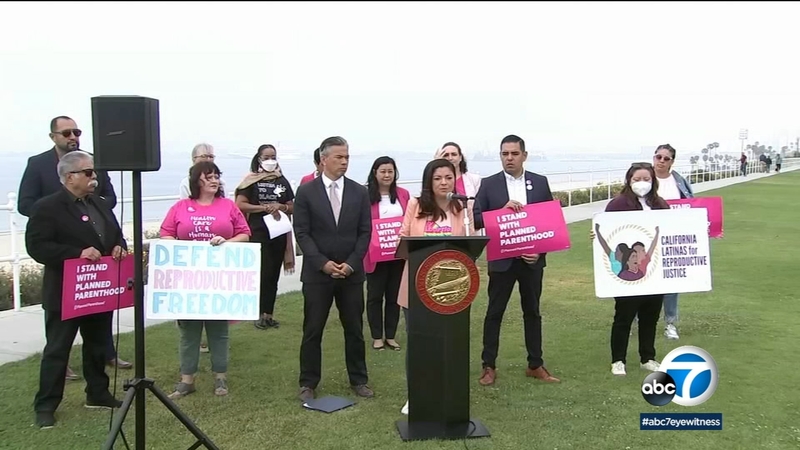 LONG BEACH, Calif. (KABC) -- On Friday, state and local Long Beach leaders gathered to discuss the potential overturn of Roe v. Wade after a draft of the U.S. Supreme Court majority opinion was leaked that would overturn it.

Roe v. Wade protects a pregnant woman's choice to choose to have an abortion. The leaked draft would end nearly 50 years of federal abortion protections if passed.

"Banning abortion would not eliminate the need for abortion care and it in fact would open the door for criminalization of providers, women and our systems of care," said Onyemma Obiekea, who is with Black Women for Wellness action project.

Throughout Southern California, many people have shown their support for the right to choose abortion.

"Hell no to going backwards. Hell no to reversing 50 years of settled law. Hell no to stripping women of their right to reproductive freedom," said California attorney General Rob Bonta.

After the draft was leaked, California Gov. Gavin Newsom and legislative leaders said they would seek voter approval to make abortions a constitutional right in California.

Long Beach Mayor Robert Garcia says the city of Long Beach has partnered with Planned Parenthood and L.A. County to take steps to protect a woman's right to choose by implementing four initiatives. Those initiatives are funding for abortion care, enhance city worker training, expanding the work force and a referral system in Long Beach for those seeking access to abortion.

The officials said they want it to be clear that Roe v. Wade is not overturned yet, and they're hoping women will always have the right to choose to get an abortion.