"In case something happens to me here, then somebody would know I'm in the house with a baby," she said. "If I die in here, at least cops would see the sign."
WABC
By Eyewitness News 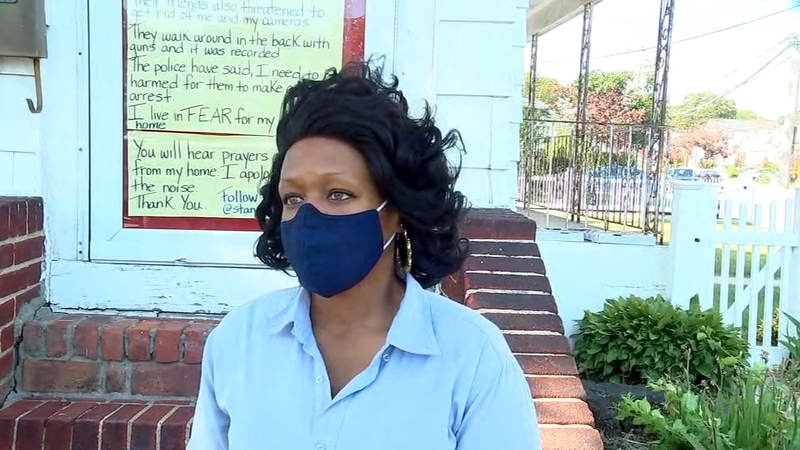 VALLEY STREAM, Long Island -- A single mother on Long Island says she is the target of ongoing threats and racist harassment at her home.

Jennifer McLeggan, a registered nurse, owns a home on Sapir Street in Valley Stream. She claims a man has been throwing feces and dead squirrels in her yard.

McLeggan says she has video of him committing the acts, and he as allegedly threatened her saying she can "'be erased."

Americans have been subjected to and been fascinated by what has become an almost daily parade of people behaving badly, all caught on camera. We talked to Stanley Roberts and a Bay Area professor who explained the psychology behind the videos.

McLeggan moved into the home two and a half years ago, but her suburban dream quickly turned into a nightmare when her next door neighbors, who are white, made it clear she was not welcome. The single mom claims it began with harassment over her yard.

McLeggan has posted signs outside her home detailing the aggression in case she is harmed. Her neighbors are now gathering around her, refusing to let her be pushed out.

Jennifer McLeggan is a nurse and single mother. She says she has tried to be a good neighbor since moving into her Valley Stream home 3 years ago.
But she claims her next door neighbors continue to harass and intimidate her 1/2@ABC7NY pic.twitter.com/obQUPIRWbj

"In case something happens to me here, then somebody would know I'm in the house with a baby," she said. "If I die in here, at least cops would see the sign."

Nassau County detectives are investigating, and McLeggan says she has photos of her neighbors with a gun in a black face mask in the middle of the night, spitting on her property.

Kemberly Richardson interviews an African American couple from Montclair who says their neighbor called police on them after a dispute over property.

Erica Coreas says she, too, was harassed when she first moved in, but not to this level.

"We're just trying to give her as much love and support as we can," Coreas said.

The neighbors have now rallied behind McLeggan, with the goal now for the mother and her toddler to live in peace. McLeggan fears police have their hands tied.

ABC7's sister station WABC knocked on her next door neighbor's door on Sunday night, and there was no answer.

There is a protest planned this Thursday in support of McLeggan and her daughter.

"Nassau County will not tolerate any resident being harassed or intimidated because of who they are or what they look like," Nassau County Executive Laura Curran said in a statement. "We take these allegations seriously, and Nassau County PD is conducting a thorough investigation into the matter."

The Manhattan District Attorney's office announced charges Monday against Amy Cooper, the white dog walker who was caught-on-tape threatening to call police on a Black bird watcher in Central Park.