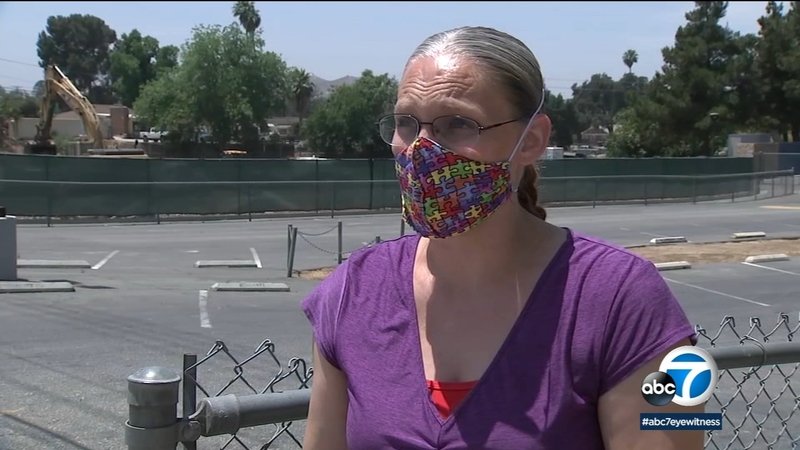 RIVERSIDE, Calif. (KABC) -- A Riverside woman is demanding answers from school district administrators after her 11-year-old son, who has autism, was dropped off by a school bus driver at the wrong school.

Amy Valdez said if not for a GPS tracking device on her son's wristwatch, she would have had no idea where her son was located.

"They need to double and triple check before they start picking up children on buses and dropping them off, they need to make sure they're at the right location," said Valdez. "And in the event that they're not, they need to definitely call the parent. I was never notified by the school."

Valdez said it happened on Tuesday morning in Riverside on the first day of summer school. The school bus picked up both of her children at their home. Her other son was supposed to be dropped off at Longfellow Elementary and her 11-year-old was supposed to be dropped off at Highland Elementary. But she said for some reason, both of her kids were asked to get off the bus at the first school.

"My son is 11 years old and he has autism. He's a very smart boy, but he's a rule follower, and he tries to do what he's asked," Valdez said.

Valdez said her son was directed to one of the classrooms. But because school officials had no idea who he was, she said they had no idea of his special needs.

"And he proceeded to get in trouble over and over, because with autism there's no impulse control. He doesn't raise his hand. He blurts stuff out," said Valdez. "That's something he's working on. But this school that doesn't know him just accepted him, and so they had no idea."

Eventually, she said her son went to a restroom for privacy, and activated a GPS tracking feature on his wristwatch. It alerted Valdez to his location, and sent her a text message reading "I need help."

When she called the phone number listed on a school email, a recording indicated the phone number had been disconnected. Then, when she drove to the school in an attempt to find her son, she said she was told that because of COVID-19 protocols she had to wait outside until they could figure out what had happened.

"I waited more than 30 minutes outside before they came back out and told me (my son) was here. And then I waited another 15 minutes before I could see his face," Valdez said.

Valdez later confronted the school bus driver, thinking he was the one who made a mistake by dropping her son off at the wrong school. But Valdez said the bus driver presented paperwork showing he was simply following directions; the paperwork indeed shows instructions for the student to be dropped off at Longfellow, as opposed to Highland where the boy was assigned.

"The safety and security of each and every student is a top priority at Riverside Unified School District. The student, who was dropped off at Longfellow Elementary School for the first day of summer school, was traveling with his younger brother, and was always safe and secure.

"Our staff spoke with the child's mother last week to provide information about the students routing plan. The parent was notified that both boys were able to be picked up at home, together, and would both be dropped off at Longfellow Elementary School. We apologize for this routing mistake as the older student was actually supposed to be dropped off at Highland Elementary School, where he was enrolled. What is most important is that the student was always safe and supervised.

"As is normal with the first day of summer school, there were a number of students who showed up at school who were not enrolled at that school. As is protocol, he was placed in an age-appropriate class at Longfellow while his enrollment was researched. His whereabouts were always known to the school, and when his mother arrived at the school, the school staff spoke with her and shared with her where he was and what had happened.

"The first day of school is always exciting, but includes many moving parts with unenrolled students showing up, and staff working hard to meet, engage and organize with their students. We apologize for any worry or concern this caused his family, but the student was always safe, secure and accounted for throughout this situation."