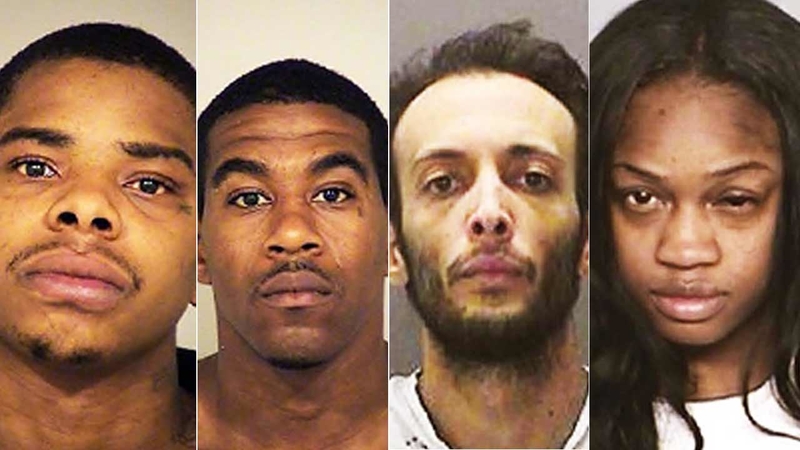 CAMARILLO, Calif. (KABC) -- Four Los Angeles residents believed to be part of a burglary ring responsible for more than two dozen residential burglaries across Southern California and Nevada have been arrested, the Ventura County Sheriff's Department announced on Tuesday.

On March 31, Brumfield and Bishop entered a home in the 1000 block of Modesto Avenue in Camarillo and assaulted two elderly homeowners. The two men fled in a getaway car driven by Williams without taking any property. Mimouni was not present during the home-invasion robbery, but was later linked to the "Knock Knock Burglary Crew."

Investigators say 15 Ventura County residents were victimized by the four suspects between Dec. 25, 2014 and April 7, 2015.

Detective Victor Medina of the Ventura County Sheriff's Department says the burglaries extend to Los Angeles, Santa Barbara and Clark counties, and that they expect to tie the suspects to even more crimes as they continue to investigate.

He would not provide details on how authorities closed in on the four suspects, but Medina says diligent work on the part of a multi-agency investigation spearheaded the effort.

Williams and Bishop were taken into custody on May 6. Bishop was booked on robbery and attempted forcible oral copulation charges about three weeks later after allegedly trying to force his cellmate to orally copulate him. Bishop had been "using fear to take his cellmate's commissary."

Brumfield was arrested on May 15 following a standoff with a SWAT team at his girlfriend's home in Lancaster. He allegedly barricaded himself in the attic with two handguns and was forced out by chemical agents. The guns had allegedly been stolen during a residential burglary in Nevada.

On April 23, Mimouni was arrested by LAPD on residential burglary charges. Investigators believe he was the crew's ringleader.

The suspects are each being held in lieu of $1 million or more.

The investigation is ongoing. Anyone with further information on this case was urged to contact the Ventura County Sheriff's Department.