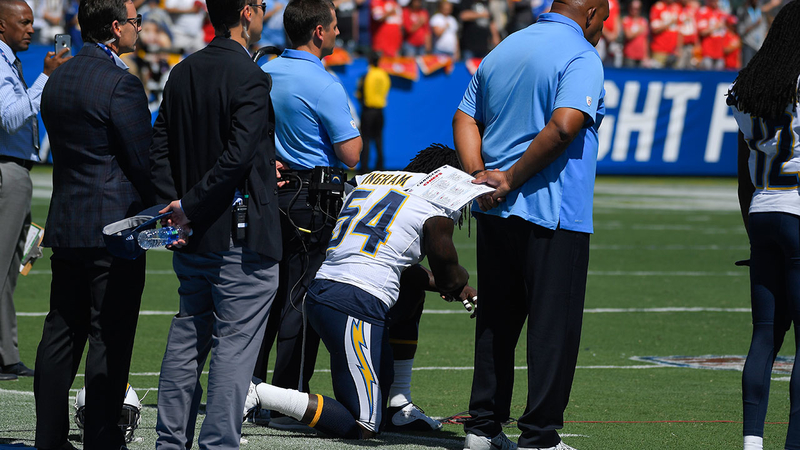 CARSON, Calif. (KABC) -- At least five Los Angeles Chargers players kneeled or sat on the bench during the playing of the national anthem before the team's home game against the Kansas City Chiefs on Sunday.

The actions came as players around the league reacted with defiance to President Donald Trump's comments about kneeling during the anthem. Trump said that owners should fire any players who refuse to stand for the anthem.

Other Chargers stood and linked arms in a show of solidarity during the anthem, as a few also raised one fist.

About 10 Chiefs players also sat during the anthem.

Most Los Angeles Chargers players linked arms during the national anthem, while some kneeled or sat on the bench before Sunday's home game against the Kansas City Chiefs.

Owners from around the league stood on the field with their players Sunday in a show of support, including Chargers owner Dean Spanos.

The team released a statement from Spanos expressing support for the players: "I have tremendous respect for our flag and the men and women who defend it. Ours is the greatest nation in the world, one in which people are able to speak freely and stand up publicly for their beliefs. Our players, as do all Americans, have every right to speak their mind and from their heart. It was an honor to join them on the field today."

The team also released a video of Chargers and Chiefs players grasping hands in prayer prior to the game.

The Chiefs won the game 24-10, leaving the Chargers winless since their move to Los Angeles.

Chargers quarterback Philip Rivers threw three interceptions. He led the NFL in pickoffs twice in the past three seasons, including last year when he had a career-high 21.

"It was a rough day," Rivers said. "All three were throws, poor decisions. I just never got in any kind of groove the whole day. You hate to be the guy that lets down the group."

"It wasn't good enough," Lynn said. "You might say we're the same ol' Chargers, and right now we are. So we've got to go back to work, and we've got to get better."

The Chiefs (3-0) beat the Chargers for the seventh straight time and have won 12 straight AFC West games.

Chiefs quarterback Alex Smith grew up in the San Diego area rooting for the Chargers.

"It was weird not playing the Chargers in San Diego," said Smith, who played high school, college and NFL games at what used to be called Qualcomm Stadium in San Diego.

"I grew up with the San Diego Super Chargers, but it was cool to play here. I enjoyed it. I don't know if we'll ever have another opportunity to play in a venue this small where it is intimate."

The Los Angeles Rams played on Thursday, prior to Trump's comments. Owner Stan Kroenke released a statement Sunday expressing support for the national anthem, but also for players' rights to peacefully express themselves.