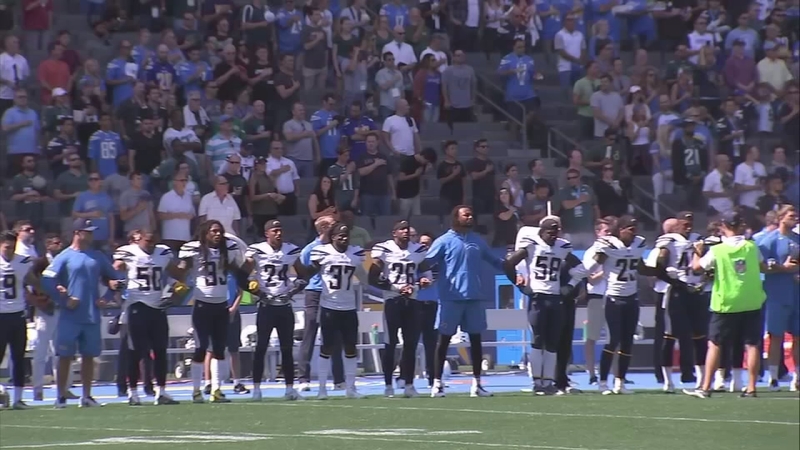 CARSON, Calif. (KABC) -- Groups of demonstrators joined some Los Angeles Chargers as they protested once again during the national anthem ahead of their game against the Eagles at the StubHub Center Sunday.

During the national anthem, a long line of players were seen locking arms while others put their hand over their heart. No players appeared to be taking a knee.

Members of the California-based Courage Campaign, Democracy for America, activists from Black Lives Matter and other organizations participated in the protest ahead of the game, which started around 1 p.m.

Demonstrators said they are aiming to re-center the protest on ending police violence against people. Their plan was to have a kneeling human chain to remember what the original protest was about.

President Donald Trump tweeted about the controversy ahead of Sunday's games, saying it's "important players stand" during the national anthem.

Very important that NFL players STAND tomorrow, and always, for the playing of our National Anthem. Respect our Flag and our Country!

Most Chargers stood and linked arms in a show of solidarity during the anthem before the team's home game against the Kansas City Chiefs just one week ago.

At least five players kneeled or sat on the bench and a few others raised one fist during the anthem.

Several Los Angeles Chargers players kneeled or sat on the bench during the playing of the national anthem before the team's home game against the Kansas City Chiefs on Sunday.

The actions came as players around the league reacted with defiance to President Donald Trump's comments about kneeling during the anthem. Trump said that owners should fire any players who refuse to stand for the anthem.