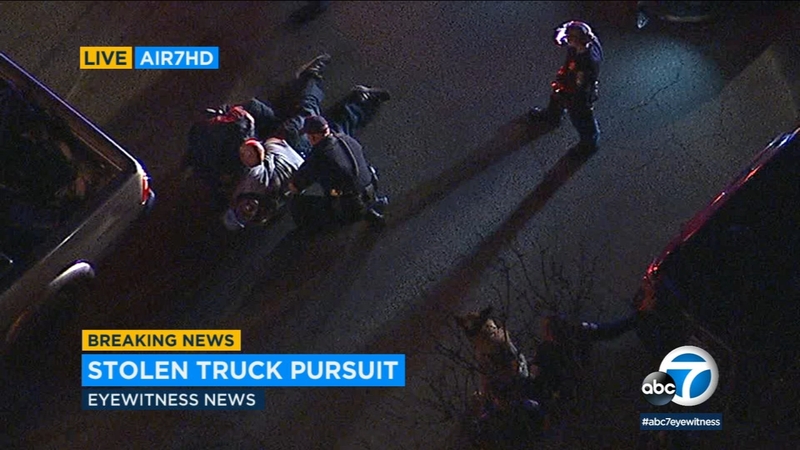 Stolen-vehicle suspect surrenders to police after bizarre chase in LA

BELLFLOWER, Calif. (KABC) -- A stolen-vehicle suspect in a pickup truck led authorities on a chase over dozens of freeways through Los Angeles County, eventually ending in a residential area in Bellflower Friday night.

The chase started shortly before 10 p.m. in South Los Angeles after police picked up a LoJack signal. Authorities said the 2015 Toyota Tundra came from the Orange County area. When authorities tried to stop the suspect, he began fleeing in the vehicle.

Once the suspect got on the eastbound 10 Freeway, California Highway Patrol took over the pursuit.

The suspect weaved in and out of some traffic on the freeway, but did not appear to drive erratically or at high speeds at the beginning of the chase. The suspect eventually merged onto the southbound 710 Freeway.

A stolen-vehicle suspect led authorities on a chase all over dozens of freeways in Los Angeles County, even taking them back to right where the pursuit first started.

Within a few minutes, the suspect got on the southbound 5 Freeway in the Commerce area.

Shortly before 11 p.m., the suspect continued to flee on surface streets in Long Beach. For a short time, the suspect got back on the southbound 710 Freeway, but exited again and remained in the city.

During the chase, the suspect began turning the headlights off and picking up speeds, especially when he or she was on the freeway.

Around 11:15 p.m., the suspect exited the freeway in the Compton area, hitting speeds as high as 65 mph on surface streets. At some points, the suspect ran through red lights and weaved dangerously close to other vehicles.

An hour into the pursuit, the suspect led authorities right back to where the chase started in South Los Angeles. In what appeared to be a big circle, the suspect got back on the 710 Freeway and back into the Paramount-Long Beach area.

A stolen-vehicle suspect who led authorities on a bizarre chase all over Los Angeles County stopped his vehicle in a Bellflower neighborhood only to try and flee again before stopping one last time.

Eventually, the suspect pulled into a residential neighborhood in the area and began slowing down. The vehicle finally came to a stop and four patrol vehicles pulled up behind as officers stepped out with guns drawn.

The suspect remained in the vehicle, appearing to change his clothes. After about 20 minutes, the suspect turned the vehicle back on and drove off.

As the suspect traveled down the street again, he drove right past CHP vehicles at the end of the street.

But within a few minutes, the suspect stopped again in the middle of another street.

As he appeared to be acting erratic inside the truck, police used shields and got close enough to the vehicle to deploy a spike strip underneath the truck near the back tires.

Authorities soon fired some non-lethal rounds at the vehicle, prompting the suspect to exit the vehicle and surrender to police.