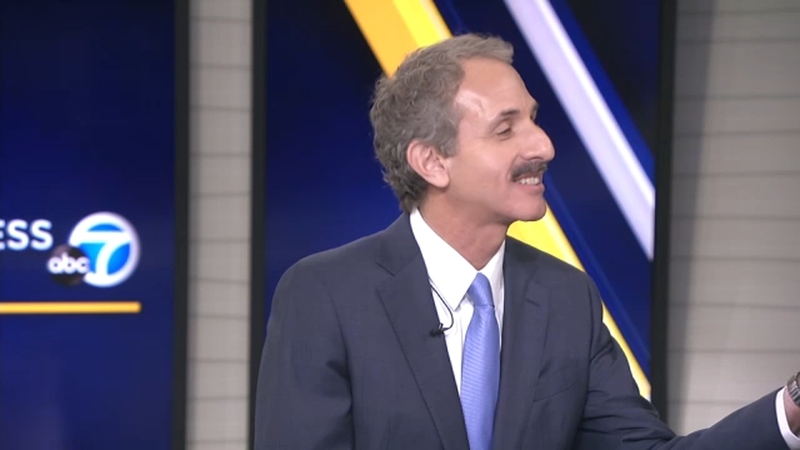 LOS ANGELES (KABC) -- The day after announcing his candidacy to become the next mayor of Los Angeles, City Attorney Mike Feuer sat down with Eyewitness News for a conversation about his campaign as well as his current office's response to scams related to the coronavirus outbreak.

The 61-year-old Democrat is the first major candidacy to enter the race, which will determine who will replace incumbent Mayor Eric Garcetti when he is termed-out in 2022.

"I'm going to be running like I would govern as mayor, which is 1,000% in," Feuer told ABC7. "And so I wanted to get started at the very beginning and be active this week.

"I'm starting a listening tour throughout Los Angeles. I want to be really hearing what voters and neighborhoods care about the most, because that's a central theme of my campaign - is bringing accomplished, neighborhood-centered leadership to the mayor's office."

Feuer has twice been elected city attorney, first in 2013, when he defeated incumbent Carmen Trutanich, then in 2017, after running unopposed. He ran for the office in 2001 and lost to Rocky Delgadillo.

Feuer served on the Los Angeles City Council from 1995 to 2001, and later served three two-year terms in the state Assembly.

As more cases of the novel coronavirus are confirmed across the U.S., consumer advocates are warning of something spreading with it: Scammers ready to take advantage of the public's anxiety.

Asked about the likelihood that the race for mayor is likely to see a crowded field, the Feuer said he would "welcome the competition."

"I need to earn this, the role as mayor, as I did when I ran for city attorney," he said.

A complete transcript of Feuer's in-studio interview with ABC7 is below:

ABC7: We are lucky to have Mike Feuer with us, L.A. City attorney. Mike we're going to start out with me scolding you. You announced that you were going to run for Mayor in 2022, but it's in the L.A. Times. You knew you were coming here today.

ABC7: Tell us more about that. It's a long process, right?

FEUER: It is, I announced because under LA rules once can start running as of Sunday, a couple days ago. And I'm going to be running like I would govern as mayor, which is a thousand percent in. So I wanted to get started at the very beginning and be active this week. I'm starting a listening tour throughout Los Angeles. I want to really be hearing what voters in neighborhood care about the most because that's a central theme of my campaign is bringing accomplished, neighborhood centered leadership to the mayor's office as I have as city attorney. As you know, we just dramatically increased our prosecutor team, those problem-solving lawyers in neighborhoods. We have a neighborhood justice program, a neighborhood school safety program, this theme of Los Angeles which is so sprawling, being a united city but comprised of neighborhood that have unique concerns is at the heart of my goal as mayor.

ABC7: This is going to seem like the democratic race for president, it seems like it's a very full field.

FEUER: We are just getting started, and you know I welcome the competition. I need to earn the role of mayor as I did when I ran for city attorney.

ABC7: We wanted to talk about coronavirus, you are not a doctor, but your expertise will help a lot of people who are watching us here today because anytime there is natural disasters or any kind of major news story scams come with it. What kind of scams are going around with the coronavirus?

FEUER: Well first, as you pointed out, when people are scared they're vulnerable. That's when offices like mine, really need to assert ourselves, to preempt people from ever having to confront being scammed. So for example, online there are scams associated with purported cures or vaccines. There is price gouging that may be underway online. We know that Amazon removed about 1 million products from their website because either they were counterfeit or they were the result of price gouging. And China-The Chinese took 31 million masks off of the internet because they weren't authentic. And so, at this moment when everybody is uptight, I just want to caution our viewers to take a moment.When you see something, you know, a cure online think twice about that when the CDC is saying that's maybe a year away. Price gouging, if you are concerned that you are a victim of price gouging and in California that means, the price is 10% more than what it was the day before the emergency was declared, contact our office let us know, we want to investigate and follow up. I'll be doing more about this, soon. We are doing investigations right now on this question because it is inexcusable that someone would take advantage of someone else in this crisis.

ABC7: is that the only time someone would contact the city attorney's office? Where do you guys step in? Because some of this stuff is state wide, nationwide, and worldwide.

FEUER: Well you know, we've been involved in state and national issues before. In the Wells Fargo scam for example, where we really are on the cutting edge of changing banking policy across the country. You know, that was our office during that. So I want our team to be vigilant, protecting Los Angelinos, but at the same time our work can have an effect statewide and across the country, and we are being actively engaged right now on this issue.

ABC7: I want to make sure people understand that this isn't just internet savvy. My family got scammed with an email. So it's not just corona virus, it can get anyone. Many people are getting caught up in the internet scandal.

FEUER: And in fact many scams are not on the internet. Right now we are into tax season, we know that there have been these tax scams where someone purported to be from the IRS calls and says, you're going to be going to jail soon unless you send us money right away. The IRS never engages in that, they always send you a letter first.

ABC7: is the easiest thing to hang up that phone, delete that email? Is that just the simplest?

FEUER: Absolutely and if you are concerned, you initiate the call to your service provider, the IRS and you that you've reached out yourself and it's not a scammer on the other end of the phone.
Report a correction or typo
Related topics:
politicslos angelescoronavirusscamscampaign
Copyright © 2021 KABC-TV. All Rights Reserved.
More Videos
From CNN Newsource affiliates
TOP STORIES