L.A. County's public health director suggested that a dramatic uptick in average daily cases of coronavirus over the past month is likely due in part to gatherings of sports fans.
City News Service 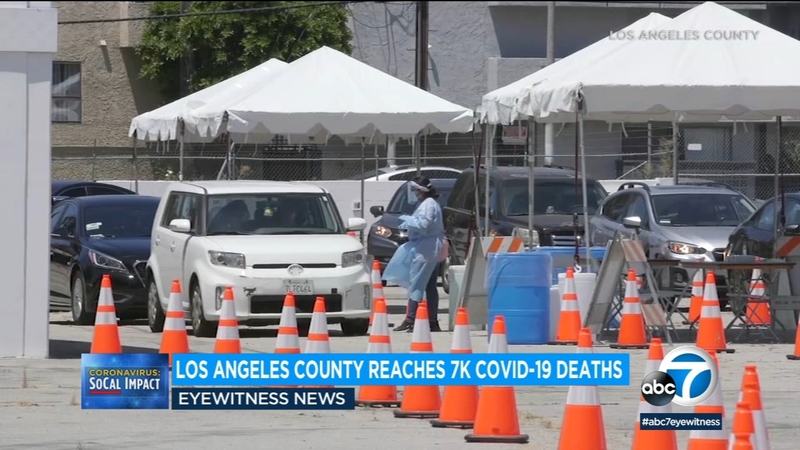 LOS ANGELES (CNS) -- Los Angeles County reached the grim threshold of 7,000 COVID-19 deaths and surpassed 300,000 cases Monday, and the county's public health director suggested that a dramatic uptick in average daily cases over the past month is likely due in part to gatherings of sports fans.

Dr. Barbara Ferrer said the county has seen a concerning increase in daily case reports, rising from an average of about 940 per day at the beginning of October to almost 1,200 per day over the past week.

She said the spike, "is not steep as what we saw in July, but this is a cause for concern."

"This is a call to everyone - individuals and businesses - to understand the increases we're discussing today are the results of decisions we collectively made two to three weeks ago," Ferrer said. "And the actions we're taking today will influence whether we're able to continue our recovery journey, or we stall or even take steps backward. We do need to slow the transmission to allow for economic recovery."

Ferrer again warned the gatherings of people from different households in close proximity are a major cause of disease spread.

She has noted in recent weeks that younger residents are the primary drivers of new cases.

And on Monday, she suggested that the recent start of college and pro football, the NBA playoffs and the Major League Baseball post-season may be playing a role in the daily case increases over the past month.

"We have all seen the pictures of sports fans rooting for their teams where they're shouting in the middle of a large crowd, and almost no one is wearing a face covering. This is the perfect setting for transmitting the virus," Ferrer said.

Asked to expand on the issue, Ferrer said gatherings of sports fans could be "contributing the most" to the recent case increases.

Fans are still prevented in the county from attending sports events in person, but many still flock to restaurants or other establishments to watch the games on TV.

The cases increases "do correspond with gatherings happening more frequently as people come together with non-household members to watch games," she said. "And it wasn't just the Lakers or the Clippers. "It's not just basketball. We now have football games that are happening and of course we've had the Dodgers in post-season for quite a few weeks already."

"I think it's really wonderful that we both have incredible teams with so much talent and also incredible spirit amongst people in L.A. County who root with their hearts and their soul for their teams to do well," she said. "The downside of this is during a pandemic some of the things we've done in the past just don't make sense. Gathering in large crowds to watch games indoors, people aren't wearing their face coverings, people are yelling a lot. That's just not sensible. Even gathering outdoors at dining areas and watching games with hundreds of people and celebrating by jumping up and down with no masks on, hugging perfect strangers, again with a lot of shouting and cheering. It's so easy to spread the virus."

Ferrer also said the possible correlation between sports fan gatherings and an increase in COVID-19 trends is one of the reasons most students have not been able to return to classrooms.

"We need to allow the economy to thrive, but we cannot do it at the expense of keeping our students from being in schools and keeping people from being as healthy as possible," she said.

Los Angeles Unified School District Superintendent Austin Beutner said it's still too dangerous to bring hundreds of thousands of children, teachers and staff together in schools.

'We cannot put schools in a position to become a petri dish, where an 8-year-old child causes a 30-year-old teacher or a 50-year-old bus driver or a 70-year-old caretaker at home to become ill," he said.

However, LAUSD schools are not strictly conducting online learning. High-needs students are allowed on many campuses. But officials say those campuses have reported an increase in cases, from 10% of the student body to 25%.

Ferrer's comments came on a day the county reported another eight coronavirus-related deaths, pushing the county's cumulative total since the start of the pandemic to 7,000.

The county also announced another 861 cases of Covid-19.

Although the number reflected the typically low amounts reported early in the week due to testing lags from the weekend, it was enough to lift the county beyond the 300,000-case milestone, with the total reaching 300,614.

There were a total of 767 people hospitalized due to the virus as of Monday, down from 785 on Sunday.

On her theme of discouraging large gatherings, Ferrer also issued an early warning for people to celebrate Halloween safely on Saturday.

She urged residents to modify their actions to the pandemic-using Zoom gatherings, holding at-home scavenger hunts or taking advantage of drive-through Halloween displays.

She again discouraged door-to-door trick-or-treating, although the tradition isn't being outright banned by the county's health order.

She stressed that Halloween parties or other large gatherings are prohibited under the order.

"This pandemic has forces so many to sacrifice so much this year, and we recognize the frustration and disappointment with the holiday restrictions," she said. "For now though, it's simply not safe to celebrate holidays the way we usually do. Being close to others who are not in our household carries with a lot of risk for transmitting Covid-19 this year."
Report a correction or typo
Related topics:
health & fitnesslos angeles countyhealthmlbnbacoronaviruscovid 19 pandemic
Copyright © 2021 by City News Service, Inc. All Rights Reserved.
TOP STORIES
Imprisoned 'Dating Game Killer' Rodney Alcala, 77, dies in California
SoCal man, 34, who mocked vaccines dies of COVID-19
Pearl Harbor remains identified as Navy sailor from CA
Overdose deaths from meth up in LA County during pandemic
Memorial bike ride honors 1st LAPD officer to die from COVID-19
Mother arrested after 2 young kids left in hot Bakersfield car
Shyamalan's 'Old' presents new ways to think about aging
Show More
Vaccines are 'personal decision,' Hillsong Church founder says
Police officers save woman dangling from Vincent Thomas Bridge
Black car buyer's experience marred by dealer's 'racist' Facebook post
Elementary school students plant fruit trees in Westlake 'food desert'
OC sheriff investigating death of man found in lake
More TOP STORIES News